Death of the “Father-in-Law of Europe”

January 29th, 2011 marks the one hundred and fifteenth anniversary of His Majesty King Christian IX of Denmark’s death at Amalienborg Palace in 1906.

Born His Serene Highness Prince Christian of Schleswig-Holstein-Sonderburg-Beck on April 8th, 1818 in Gottorp, Duchy of Schleswig; Prince Christian was the sixth child and fourth son of HSH Friedrich Wilhelm, Duke of Schleswig-Holstein-Sonderburg-Beck and his wife, Louise Caroline of Hesse-Kassel (a granddaughter of King Frederik V of Denmark, through her mother Princess Louise of Denmark and Norway, Landgravine of Hesse). The Prince was accompanied by six brothers (three older, three younger) and three sisters (two older, one younger) for his childhood.

The family dynamic changed severely in February 1831, when the Duke passed away at the age of 46. Prince Christian was 13, his elder brother Karl – the new Duke of Schleswig-Holstein-Sonderburg-Glücksburg – 18. His mother, the now Dowager Duchess of Schleswig-Holstein-Sonderburg-Glücksburg, was unable financially to raise all remaining minority children and as such, sent Prince Christian and some of the younger children off to Copenhagen to live with her elder sister, Queen Marie Sophie of Denmark (consort of King Frederik VI). The King and Queen only had two daughters which survived infancy (born in 1793 and 1808 respectively – the youngest, Vilhelmine Marie, would later marry Prince Christian’s own older brother Karl), and are said to have raised the Sonderburg-Glücksburg children as ‘grandchildren’. Prince Christian genuinely liked living in Copenhagen, he attended the Military Academy of Copenhagen and began a career as a Royal Horse Guard officer.

In December 1839, King Frederik VI passed away and was succeeded by his cousin, now King Christian VIII. At the age of 24, Prince Christian wed Princess Louise of Hesse-Kassel on May 26th, 1842 at Amalienborg Palace. Princess Louise was herself a descendant of King Frederik V, through her mother Charlotte, born Princess of Denmark, a sister of Christian VIII. At the time of Christian and Louise’s marriage, both Louise’s mother, brother and sister renounced their rights to the Danish throne in favour of the newlywed couple. Louise was from then the closest female relative with succession rights to Christian VIII, her maternal uncle.

In June 1943, just over one year after their marriage, Prince Christian and Princess Louise became parents for the first time, when they welcome son Christian Frederik Vilhelm Carl on June 3rd at their home of the Yellow Palace. The following year, the couple’s first daughter, Alexandra Caroline Marie Charlotte Louise Julia was born on December 1st, 1844. A second son, Christian Wilhelm Ferdinand Adolf Georg, was born on December 24th, 1845. Marie Sophie Fredrica Dagmar (named after Queen Marie Sophie) was born on November 26th, 1847; in the same year that Prince Christian was chosen as the successor to the Danish throne by King Christian VIII, after the King’s only surviving son.

In 1853, according to the Act of Succession 1853, Prince Christian officially became the heir to the Danish throne. This was the same year that he and Louise welcomed their fifth child, a third daughter, on September 29th – Thyra Amelie Caroline Charlotte Anne. Five years later, the family expanded for the final time, when Valdemar was born on October 27th, 1858 at Bernstorff Castle, Gentofte.

King Frederik VII passed away on November 15th, 1863 and Prince Christian became Christian IX. His accession came eight months after his eldest daughter, Princess Alexandra, married the heir to the British throne, the future Edward VII; and eight months after his second son, Prince Wilhelm, was elected as the King of the Hellenes (he was from then on known as George I).

Christian IX’s first major act as King was to sign the November Constitution, which created a joint parliament between Denmark and Schleswig (the Duchies of Schleswig-Holstein had not been inherited by Christian when he became King, due to a differing line of succession than the traditional). The November Constitution was a violation of the London Protocol of 1852, which stated that the Duchies Schleswig, Holstein and Lauenburg were to be joined in union with the Kingdom of Denmark, whilst retaining their independance. Another major point of the London Protocol was that Schleswig was not to receive any larger constitutional connection with Denmark than Holstein. Under immense pressure early in his reign to sign the Constitution (which would provide greater unity for Denmark and Schleswig), Christian did so on November 18th, in order to appease his Danish subjects, who doubted his loyalty. Prussia and Austria then declared war on Denmark in February 1864 for violating the London Protocol, beginning the Second Schleswig War. Lasting for eight months, the war ended with the Treaty of Vienna annexing Schleswig, Holstein and Lauenburg to Prussia and Austria. Needless to say, the reign of King Christian IX had not begun on a positive note.

This unpopularity of the Danish King lasted for several more years. A slight concession on the King’s behalf in 1874 when he signed a treaty allowed Iceland its own constitution improved his reputation slightly, but Christian IX’s support for the conservative government of Højre (a right-wing political party), with Jacob Brøjnnum Scavenius Estrup as Prime Minister between 1875 and 1894, was seen, by the Danish people, as a prevention of democracy throughout Denmark, stemming from Estrup’s authoritatian methods of governing.

Denmark did see some favourable changes throughout the middle years of Christian IX’s reign, pensions for the elderly were introduced in 1891 and social security benefits in 1982. In 1898, King Christian and his family went into mourning following the death of Queen Louise on September 29th at the age of eighty-one.

View the image at Webshots

At the turn of the century, the King’s popularity took a turn for the better, when he reluctantly appointed a government headed by the Venstre (National Liberal Party) in 1901. His populartity rose, and continued to do so for the next five years until his death on January 29th, 1906 at the age of eighty-seven. He was interred next to his wife in Roskilde Cathedral following his February 15th funeral. Christian IX was succeed by his eldest son, the new King Frederik VIII.

Following his six children reaching majority and subsequently marrying, King Christian IX became colloquially known as the “father-in-law of Europe” due to the dynastic and wide-spread marriages the Princes and Princesses made. Queen Louise was the driving force behind these marriages, eager to see her children married well (Louise’s dynastic ambitions have been compared to those of Queen Victoria – the woman whose hand in marriage her husband had sought in the late 1830s). As previously mentioned, Princess Alexandra was the first of the six offspring to marry, wedding HRH The Prince of Wales (Albert Edward) on March 10th, 1863. Princess Dagmar was second to marry, although her love life had been severely dampened by the sudden death of her first fiancé, HIH Nicholas Alexandrovich, the Russian Tsarevich, in April 1965 after a 1864 bethrothal. The Tsarevich’s last wish, however, was that Dagmar marry his younger brother, Alexander (who was now the Russian heir). Their marriage took place on November 9th, 1866. Following the wedding, Dagmar took the name Marie Feodorovna, in honour of her father’s aunt, her namesake. King Christian and Queen Louise’s second son, George of the Hellenes, was third to marry; when he took HIH Grand Duchess Olga Constantinova of Russia as his bride on October 27th, 1967. The heir to the Danish throne, and thus the most important dyanstically to Denmark, Crown Prince Frederik married HRH Princess Louise of Sweden on July 28th, 1869. The King and Queen’s youngest daughter, Princess Thyra, became HRH the Crown Princess of Hanover upon her marriage to HRH Ernst Augustus, Crown Prince of Hanover and 3rd Duke of Cumberland on December 21st, 1878. Prince Valdemar was the last to marry, in 1885, when he married Princess Marie d’Orléans on October 20th. Vast family gatherings were held at Fredensborg Palace and Bernstorff Palace (when the gathering was smaller). Between King Christian and Queen Louise’s six children, thirty-nine grandchildren and seventy-two great-grandchildren (including three double great-grandchildren, Olav V of Norway and Princes George and Flemming of Denmark) were born: 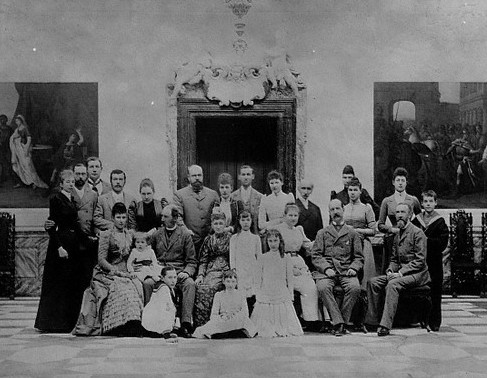 Descendants of King Christian IX and Queen Louise today are found in the Royal Families of Denmark, Norway, Great Britain, Belgium, Luxembourg, Greece, Romania, Spain, Russia, Hanover, Mecklenburg-Schwerin, Baden and Schaumburg-Lippe. A 2004 documentary produced in Denmark, A Royal Family, documents the life of Christian IX and his descendants; and includes interviews with various reigning and non-reigning royals who have descended from the “father-in-law of Europe” and his Queen.

Click here to read about Christian IX at The Royal Forums.

2 Responses to Death of the “Father-in-Law of Europe”