Princess Ghida Talal of Jordan, born Ghida Hani Salaam on July 11st, 1963 in Beirut to a distinguished Lebanese political family, celebrates today her 50th birthday. Ghida is the daughter of Hani Salaam and Rajaa Arab. She has one sister, Dalia, and two brothers, Mohammed and Yaser. 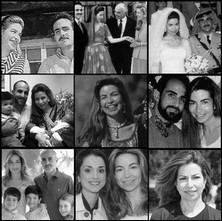 She left London to work in Argentina as a correspondent for London’s Sunday Times newspaper. Her job also took her to Beirut where she covered the fighting between the various Lebanese factions for the Reuters news agency. Her final journalistic experience was with the Financial Times of London.

In July 1991, Ghida Talal married Prince Talal bin Muhammad of Jordan at Zahran Palace in Amman. Soon after, King Hussein asked her to establish the International Press Office of the Royal Hashemite Court as well as to become his Press Secretary. Princess Ghida served in this position until King Hussein passed away in 1999.

In October 2001, King Abdullah II appointed her as the Chairperson of the King Hussein Cancer Foundation (KHCF) due her experience as wife of cancer survivor (six months after their wedding Prince Talal suffered a cancer).

She is the holder of several decorations, amongst them the Kawkab Grand Cordon (Star of Jordan) and the Istiqlal Grand Cordon (Independence) from Jordan, the Cross of Isabel and Ferdinand the Catholic from Spain and the Grand Cross of St. Olav from Norway.