The Civil Marriage of the Prince and Princess of Monaco

As one might expect, there was much sun and clear skies on Friday, 1 July when the Sovereign Prince of Monaco, Albert II, signed the register to become the husband of Charlene Wittstock. Charlene legally took the rank and style of her husband, becoming a Serene Highness and Princess of Monaco — or, if you prefer, Madame Grimaldi. The civil marriage took place in the Palace Throne Room and was attended by government officials, family, and close friends. However, it was not completely off limits to the public. Ordinary Monegasques and the expected crop of summer-time tourists were able to watch the couple exchange their “Oui’s” on big screens that were set up around the principality. 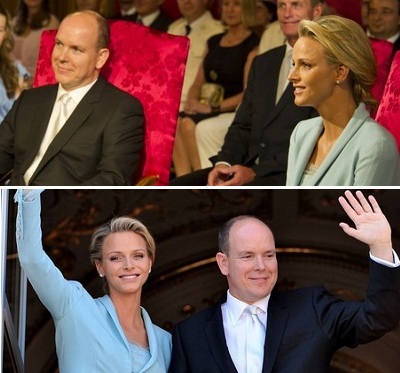 View these images and more at Daylife

The new princess wore a pretty blue suit (Chanel) and joined her husband, who wore his princely uniform, at the gallery balconies to wave to the cheering crowd. They kissed and she rested her head on his shoulder.

The Prince’s sisters and their children appeared at the balcony at different moments, and visiting foreign royalty assembled at the many other balconies along the Palace gallery.

A troupe known as Les Palladiennes de Monaco led the procession out of the palace. In the court where the crowd was being entertained by singers and dancers, the Prince delivered an address.

View the full image at Daylife

After sunset, there were fantastic fireworks on  the harbor and a concert by Jean Michel Jarre.