In the afternoon of November 16, Clarence House released a brief announcement telling the world about the engagement of Prince William of Wales and his long-term girlfriend Kate Middleton. Since this announcement was made, royal-watchers from all around the world could hardly wait for Miss Catherine Middleton’s first official public performance. At 16:45 London hour, the newly engaged couple appeared in front of the media for a photocall in St. James Palace. 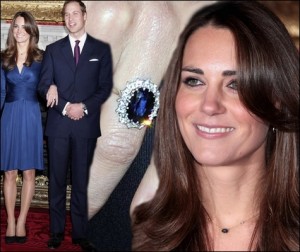 Thanks to TRF member Her_Majesty

Miss Catherine Middleton, being all smiles, had chosen a deep blue, knee-length belted silk jersey dress with soft v-neck, broad cummerbund and straight pleated skirt. A pair of simple black pumps finished the lovely look. The dress was made by Issa London, one of her reportedly favorite designers – Daniella Issa Helayel, who is originally from Brazil, has dressed celebrities like Madonna and Scarlett Johannson before. Miss Middleton’s royal blue dress, which had been available for £385 at an online store, has been sold out within minutes after the royal couple’s public appearence. It is more than likely that Catherine Middleton chose the lovely dress to complement her engagement ring – the stunning sapphire ring that once belonged to Prince William’s mother, the late Princess Diana.

Filed under The United Kingdom
Tagged Engagement, Fashion, Jewellery, The Duchess of Cambridge, The Duke of Cambridge.