On This Day: Tsar Nicholas II of Russia Abdicates

One century ago, the Tsar of All the Russians abdicated his throne after several days of protests and uprisings in the Russian capital, Petrograd.

Tsar Nicholas II was in Mogilev, where the Russian Army’s staff headquarters were during the First World War, on March 10 when he was informed of the growing dissent in Petrograd.

For a week, protests had grown rapidly throughout the city – 250,000 were now on strike, bringing Petrograd’s industrial sectors to a standstill. Their protests were focused on three things that had caused serious problems for the Russian people since the country joined the War in 1914: they wanted to end food shortages, end Russia’s participation in the War, and – most crucially – they wanted to end the autocratic regime of Tsardom. The Tsar responded by instructing the Petrograd garrison commander to have troops use rifle fire to disperse the protestors. This would backfire dramatically for Nicholas, as the following day, the first regiment company in Petrograd mutinied, with the rest joining them on March 12, leaving the government without any way to control the populace (not helped by the Tsar discontinuing the Duma that same day).

Nicholas finally decided to return to the capital on March 13, leaving Mogilev by train. He was stopped on route by revolutionaries who were in control of the railway lines, and his train was redirected to Pskov. It was here the Tsar was met by deputies from the Duma and various Army Generals, all of whom advised – nay, demanded – Nicholas abdicate if he wanted any chance of saving the monarchy.

The Tsar was, unfortunately, not well liked amongst his people, particularly those in the larger cities. His twenty-two year reign was fraught with difficulties: the Russians were defeated by the Japanese in the Russo-Japanese war; the heavy-handed response to the Bloody Sunday protests earned him the nickname ‘Nicholas the Bloody’; he implemented few changes that would improve the lives of his millions of citizens; and his ill-advised decision to take command of the Russian Army in September 1915 on the Eastern Front put him in the firing line to take the blame for any defeats the Army had (and there were many).

Also of large consequence was his choice of bride, the German-born Alix of Hesse and by Rhine. She did not make a good impression on the Russian population when she arrived in the country in 1894, her shy and aloof personality did not endear her over the years, and then – when Nicholas went to the Front – she, seen as having pro-German sympathies, was left in charge of the war-time government, which created an endless revolving door of Ministers as the Tsarina dismissed and appointed Ministers on a whim (often under the guidance of Rasputin).

As Nicholas sat aboard his train on March 15, unable to leave, he eventually made the decision to abdicate in favour of his son, the 12-year-old haemophilic Tsarevich Alexei. Several hours later, the Tsar changed his mind and abdicated on behalf of both himself and his son (having spoken with doctors, Nicholas came to the realisation that he and Alexandra would be separated from Alexei as they went into exile). Instead, Tsar Nicholas now left the throne to his only surviving brother, Grand Duke Michael Alexandrovich. 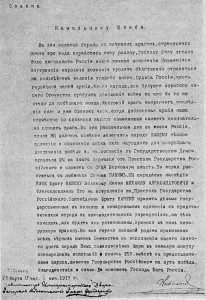 However, the following day, Michael refused to take on the Tsardom without the Russian people agreeing to keep the monarchy through a vote. The Grand Duke’s decision brought an end to the Romanov’s 300-year rule over Russia.

The former Tsar Nicholas – who took the realisation that his generals no longer had faith in him the hardest, writing that “all around is betrayal, cowardice and deceit!” in his diary – and his family were imprisoned first by the Provisional Government and then the Bolsheviks, until they were murdered in July 1918.