Her Highness was born Antoinette Avril Gardiner on April 25, 1941 at Chelmondiston, near Ipswich in England. She is the only child of Lieutenant-Colonel Walter Percy Gardiner, of the British Army’s Royal Engineers, and Doris Elizabeth Sutton.

Princess Muna spent part of her childhood in Kuala Lumpur, during her father’s posting to Malaysia, where she attended Bourne School. Thereafter Walter Gardiner and his wife moved to Jordan when he became a member of the British Army Advisory Mission to Jordan. Months later their daughter travelled out to Amman to stay with her parents. 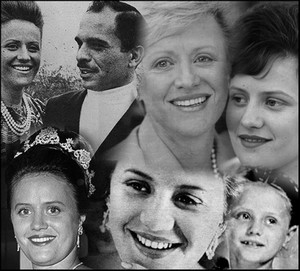 ‘Toni’, as she was known, took a job on Jordan Radio, then became a secretary at Horizon films where she worked as a secretarial assistant on the film set of Lawrence of Arabia.

How she and King Hussein first came to meet in 1960 was told by the King himself. The late King recollected that she had approached him at a fancy dress party which he had arranged in his house at Shuneh, in the Dead Sea. According some sources, Toni accosted him (he was wearing a pirate’s outfit) with the words “You look pretty scruffy, Your Majesty.” He was later to write: “For the first time in my life, here was a girl who took an interest in me as a human being and not as a King.”

From then they started a relationship, spending time together. They usually liked dancing, swimming, go-carting or horse riding. In the end, the relationship culminated on May 1, 1961 with the announcement of their engagement. That attracted the attention of the Western media, and also people who criticized the King’s choice because they thought that marriage to an Englishwoman could make an easy target for King Hussein’s enemies. King Hussein had been married before to Queen Dina, with whom he had a daughter, Princess Alia.

Their wedding took place on May 25, 1961 at Zahran Palace, the official residence of King Hussein’s mother, Queen Zein Al Sharaf. Only family members and friends attended. The bride, who converted to Islam two weeks before, took the name of Muna Al Hussein (‘the desire of Hussein’) which was chosen by the Jordanian King and after the wedding she received the title of Princess.

Eight months later, Princess Muna gave birth to their first son, on January 30, 1962, Prince Abdullah. Prince Abdullah was followed by Prince Faisal (b. 1963) and twin girls, Princesses Aisha and Zein (b. 1968). In 1972 King Hussein divorced Muna to marry the daughter of a Jordanian diplomat, Alia Toukan. Princess Muna kept her title and continued living in Amman with her four children.

The priority on the list of Princess Muna’s responsibilities is the support of the health care provision to Jordanians. Her Highness is deeply involved in issues connected to the development of nursing in Jordan, founding the Princess Muna College of Nursing. In 2002 was created the Jordanian Nursing Council by Royal Decree and HRH was appointed as the President of the Council. The Princess is also a sponsor of the Home of Peace (Mother Theresa Institution) and the Princess Muna Old People’s Home.

One Response to Princess Muna Celebrates Her 75th Birthday