The Fall and Rehabilitation of Princess Thyra 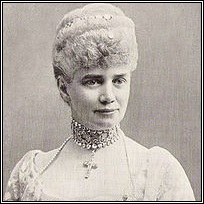 The founder of the present Royal Danish Glücksburg Dynasty, King Christian IX was  dubbed the “father-in-law of Europe”.  He and Queen Louise (of Hesse–Kassel) had six children who all married into other dynasties. Their two eldest daughters rose to illustrious positions; Princess Alexandra was exported to England to become a popular Princess of Wales and eventually, Queen of the United Kingdom and the realms. Her younger sister, Princess Dagmar, was destined for the future Tsar of Russia. After the untimely death of her first fiancé, Grand Duke Tsarevitch Nicholas in 1865, she married his brother Alexander in 1866 and took the name Maria Feodorovna.

Less known is Princess Thyra, born in 1853. Thyra eventually married into the Hanoverian dynasty, and her story is just as compelling as those of her older sisters.

By the time Princess Thyra had reached the marriageable age, Europe was running short of eligible royal bachelors. It didn’t seem to worry the gentle and unassuming Thyra. She was quite happy where she was, keeping herself occupied with artistic pursuits and enjoying the company of her beloved little brother Valdemar. Unlike her sisters, Thyra was not perceived as a beauty, however her gentle and kind manners made up for it in abundance. When you look at her picture today, it is evident that she burns through the camera lens with this enigmatic photogenic quality.

Knowing  that it would be difficult to match the marriages of Alexandra and Dagmar, Queen Louise nevertheless wanted the best possible solution for  Thyra. The Queen was a smooth operator and though no political mind per se, she left nothing to chance. However while she was busy matchmaking, something happened that changed the course of Thyra’s life.

The young princess had quietly developed a crush for a royal aide, Vilhelm Frimann Marcher, a handsome lieutenant of the cavalry. This was hardly a sensation in the royal environment. Young princesses often had their first infatuation within the comfortable confinement of the palace walls, and as long as the object of the princess’ attention knew his place, no one really bothered.

This was also the stance of Queen Louise: it was an innocent crush, which would run its course. Unfortunately the Queen underestimated the charms of the debonair lieutenant Marcher. The lovesick youngsters went far beyond lingering glances and sympathetic brushes. One sorry summer day in 1871, Queen Louise had to face the fact that Princess Thyra was expecting.

Scandal was looming over the House of Glücksburg. Marriage was completely out of the question. The King and Queen immediately went into damage limitation mode. It was Thyra’s brother, the visiting King George of Greece, who came up with the solution: She was to have her baby in Athens. The Greek capital was at a safe distance, where hardly anyone knew the young Danish princess. The journey was meticulously planned and so was the spin that was to go along with it!

In the early days of August, Queen Louise and her daughter set out for what looked like a typical royal journey with family visits en route. First they spent a few weeks with the unsuspecting Hesses at Rumpenheim. They then headed for Mon Repos, the Greek royal summer villa in Corfu before arriving in Athens in the beginning of November.

Although there were no prying cameras at the time, the Danish newspapers made regular reports on the activities of the royal family. The royals had prepared themselves accordingly – one day in November, the news broke in Copenhagen  that ‘unfortunately Princess Thyra had come down with jaundice and was confined to an isolation ward in Athens’. Soon, King Christian departed for the Greek capital with young Prince Valdemar and a small entourage, while Crown Prince Frederik took over as regent.

Around Christmas 1871, Princess Thyra gave birth to a baby girl. The plan was for the infant to be adopted by a Greek family. We do not know how much time the princess spent with her newborn, if any at all. The princess was very depressed after her ordeal and the return to Denmark had to be postponed. King Christian and Queen Louise stayed with their daughter until March 1872, when she was deemed fit for the return journey. The family made a stop in Rome for three weeks of sightseeing and socializing, hoping that Thyra would recuperate and regain her spirits. However when homebound, the young princess came down with typhoid fever, and the journey came to another halt in Geneva.

Princess Thyra with her husband, Ernst August Duke of Cumberland

In Switzerland, Queen Louise and Thyra took leave of Prince Valdemar and King Christian, who was long overdue in Denmark. Eventually, the Queen and her daughter returned to Copenhagen in June 1872. The long, sorry journey was over.

Over the following years, Princess Thyra led an uneventful life and understandably, the prospect of marriage did not appeal to her. Besides, the family knew only too well that she was damaged goods and that there would be some explaining to do to a suitor!

Queen Louise later resumed her search for a suitable husband. The elderly King Willem III of the Netherlands was dismissed as being too old (he went on to marry a young Emma of Waldeck). Prince Arthur of the United Kingdom was said to be another, though hardly serious option, considering the fact that there was no love lost between Queen Victoria and the Danish Royal Family.

Eventually, Queen Louise concentrated on Duke Ernst August of Cumberland, whom Thyra had met in Rome. He was a sensible match, albeit without a throne. The Duke could hardly be described as “dashing”, in fact the royals mused over his less than perfect looks with his trademark boxer’s nose. A more serious issue however, was his strained relations with the Prussians, to whom his father had lost the throne in 1866. It didn’t exactly alleviate matters that Ernst August had assumed the title “Duke of Cumberland” from his paternal English grandfather.

The Duke and Duchess of Cumberland with their six children

The most serious matter was that Denmark had lost the Duchies of Schleswig-Holstein in the 1864 war. The Danish government was seeking ways of regaining the mainly Danish- minded Schleswig without upsetting the Prussian applecart. A match between a Danish Princess and the Hanoverian pretender would not go down well with the Chancellor Bismarck, a fact Queen Louise must have been aware of!

Meanwhile in England, the Princess of Wales was worried that her youngest sister would end up as a spinster. Taking care not to upset Queen Victoria and the Prussian in-laws, she arranged a secret rendezvous for Thyra and Prince Ernst August who, apart from a restoration of the Hanoverian monarchy, wanted nothing more than Princess Thyra for his wife. At long last the obstacles and reservations were overcome, and the couple married in Copenhagen in 1878.

The Duke and Duchess of Cumberland lived reasonably happy ever after. Thyra had six children within nine years, and got the family she longed for. However her harrowing experience as a young girl would come back to haunt her. She suffered bouts of depression and a couple of break downs. On top of that, she had to see two of her sons to their graves. Duke Ernst August never became regent but regained access to the family fortune, which had been seized by the Germans, and the couple lead a comfortable life at “Castle Cumberland” in Austrian Gmunden, a Gothic edifice erected by the Duke in the 1880s. He never relinquished his claim to the Hanoverian throne and continued to use his title, even after it was abolished by King George V. Princess Thyra survived her husband for ten years and died in 1933.

Thyra with her daughters, Marie-Louise, Alexandra and Olga

What happened to Princess Thyra’s child? After the birth, Thyra was unhappy about the prospect of the child being raised in Greece. She begged her parents to see to an adoption in Denmark, and it is believed that they complied with her wish. From this point however, any trace of the baby girl was covered up. Eventually the story of Thyra’s misfortune leaked in Copenhagen, and it led a swarm of adopted girls born in 1871 to believe, that they were Thyra’s daughter. A few names have been in play, but the actual identity is anyone’s guess.

And the fate of Lieutenant Marcher? King Christian had him transferred to the war ministry without drawing attention. However Marcher couldn’t live with his guilt, and hanged himself in January 1872.

The story of Thyra’s illegitimate child was first published in 1975 in The House of Glücksburg by Bo Bramsen. It prompted a few denials from the Hanoverian family at the time, whereas the Danish family never denied the events.  The story was  repeated in the 2003 television documentary A Royal Family. The only riddle left is the identity and fate of Princess Thyra’s daughter. This secret rests for the foreseeable future in the royal archives in Copenhagen.

8 Responses to The Fall and Rehabilitation of Princess Thyra