Ascot Fashion: Days One and Two 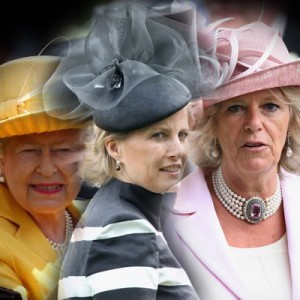 Every fashion watcher loves Royal Ascot and the opening two days of the annual race meeting did not disappoint. Tuesday and Wednesday witnessed one of the biggest numbers of British royals attending in recent years.

Day One – Tuesday
The carriage procession today included the Queen, the Duke of Edinburgh, the Duke of York, the Prince of Wales, the Duchess of Cornwall and Princess Beatrice.

The Queen wore a bright yellow and white floral silk dress with a yellow linen jacket by one of her favourite designers Stewart Parvin. image The matching yellow hat with a pleated brim and white detailing was by Rachel Trevor Morgan. image The Queen wore a spectacular diamond blossom spray brooch.

The Duchess of Cornwall has recently begun to use the creations of British designer Vivienne Westwood and choose to wear an outfit by her for Ascot. Camilla wore a patterned pale gold silk dress under a two-tone beige stripped coat. image Her large beige hat was by Philip Treacy. image

Princess Beatrice wore a short green dress with a cream jacket from the Kate Moss for Topshop range. image The jacket had also been worn a number of times by both Eugenie and Beatrice in the two years. The outfit was worn with two-tone shoes by High street shop Office and a small saucer hat with roses by Philip Treacy worn at the very front of her head. image

The Princess Royal, the Countess of Wessex and Prince and Princess Michael of Kent also attended but meet up later with the Royal party.

Sophie wore a striking white shift dress which she wore with a cropped jacket of a bold black and white stripped design. image The outfit was set off with a small black hat that was topped with a fan shaped guaze material. image The Countess’s jewellery was significant as she wore the white and black pearl earrings from her wedding day and a diamond brooch of two hearts interlinked which was a first wedding anniversary present from Prince Edward. The couple are celebrating their 10th wedding anniversary this Friday.

The Princess Royal stood out in a burnt orange jacket and patterned skirt with matching hat. image Whilst Princess Michael wore an old favourite pale blue suit with a wide brimmed hat. image

Day Two – Wednesday
The carriage procession included the Queen, the Duke of Edinburgh, the Prince of Wales, the Duchess of Cornwall, Lady Helen Taylor, Tim Taylor, the Duke and Duchess of Gloucester and Princess Alexandra.

For the second day the Queen continued this season’s trend of bold and bright. She wore a cerise and white print silk dress worn with a cerise coat trimmed with a white band by Stewart Parvin. image The matching hat was by Rachel Trevor Morgan. The outfit had first been worn last May when the Queen was on a state visit to Turkey. image The Cullinan V brooch was worn with the outfit.

The Duchess of Cornwall wore another Vivenne Westwood outfit was of a white chiffon dress with a pale pink coat. image The stunning matching hat by Philip Treacy was in a typical style that Camilla favours with lots of roses and leaves adorning the brim. image Yet it was a large pearl choker that stood out the most on this pretty outfit.

Lady Helen Taylor was making a rare appearance in the carriage procession at Ascot. An ambassador for Giorgio Armani she looked stunning in a silk loose fitting dress of beautiful colours of pinks, greys, fawns and greens. image She wore a very large flat hat in a fawn colour with white strips which she struggled to manage with the winds. image The classy outfit was topped off with a pearl choker and gloves.

The Duchess of Gloucester always recycles her outfits really well and she wore the gold suit first seen at her daughter’s wedding last July and also at this year’s Trooping the Colour a few days ago. image However she transformed the outfit with a silk scarf and a different hat. image

Princess Alexandra followed in the footsteps of her late mother Princess Marina demonstrating elegance and that ‘royal’ look. A beautifully simple black and white polka dot outfit worn with a matching hat made Alexandra the fashion winner of the day. image She added a touch of colour with a red scarf as well as red shoes! image (standing directly behind Sophie)

As with the previous day, both Anne and Sophie this time accompanied by Prince Edward meet up with the Royal party in the parade ring. On both Tuesday and Wednesday, Sophie’s father Christopher Rhys-Jones was in one of the carriages in the procession.

The Princess Royal wore one of her favourite outfits of a yellow dress coat with navel labels and a matching hat. image

The Countess of Wessex chooses to wear two shades of blue. A light blue shift dress was worn under a slightly darker shade of blue lace see-through coat. The blue coat was also trimmed in the light blue satin material. image Sophie’s large hat with the up-turned brim revealed a series of blue rose buds around the front edge and a blue band swept around the back brim of the hat. image

4 Responses to Ascot Fashion: Days One and Two