Order of the Garter Service at Windsor Castle

Windsor Castle got its share of fabulous display of pageantry for the annual Order of the Garter Service. The weather couldn’t have been better as hundreds of people gathered around the Castle to watch the spectacle. The service takes place every June on the Monday of the Royal Ascot week, known as Garter Day.

The Queen was joined by most members of her family, including the Prince of Wales, the Duke of Cambridge, the Earl of Wessex, the Princess Royal, the Duchess of Cornwall, the Duchess of Cambridge, the Countess of Wessex, and of course, the Duke of Edinburgh who appears to be recovering well from his recent illness. Notable people in attendance included two former British Prime Ministers, John Major and Margaret Thatcher, Mary Soames, Baroness Soames, and others.

The Order of the Garter is the most senior and the oldest British Order of Chivalry and was founded by Edward III in 1348. It honours those who have held public office, have contributed to national life, or have served the Sovereign personally. New appointments to the Order of the Garter are usually announced on St. George’s but the installation ceremony take place in June, on the Garter Day. The Queen formally invests new companions with the insignia in the Throne Room of Windsor Castle. This year, there were no new appointments, although there are two vacant positions.

Every June, the Knights of the Garter gather at Windsor Castle, where new knights take the oath and are invested with the insignia. A lunch is given in the Waterloo Chamber, after which the knights process to a service in St George’s Chapel, wearing their blue velvet robes (with the badge of the Order – St George’s Cross within the Garter surrounded by radiating silver beams – on the left shoulder) and black velvet hats with white plumes. Members of the Order enjoy precedence over all ranks of Knighthood, as well as Baronets. Knights  are entitled to be called “Sir”, while Ladies can add the prefix “Lady”.

Every knight is required to display a banner of his arms in the Chapel, together with a helmet, crest and sword and an enamelled stallplate. The order’s emblem, depicted on insignia, is a garter with the motto “Honi soit qui mal y pense” (“shame upon him who thinks evil upon it”). From the 18th century to 1946, appointments to the Order were made on advice from Government.

Now, however, Knights and Ladies are chosen personally by the Sovereign; bestowing the honour now remains of the Monarch’s few remaining personal prerogatives.

During the Middle Ages ladies were associated with the Order, although unlike today they did not enjoy full membership. One of the last medieval ladies to be honoured was Lady Margaret Beaufort, mother of Henry VII – the first Tudor Monarch (who, incidentally, based his claimed through her). After her death in 1509, the Order remained exclusively male (with the exception of female sovereigns), until 1901, when Edward VII made Queen Alexandra a Lady of the Order. Although the more formal aspects of the Garter ceremony were abandoned in 1805, the ceremony in all its splendour was revived in 1948 by George VI.

The Royal Knights and Ladies wore the traditional Garter outfits which consist of blue velvet robes, known as mantels, and black velvet hats with white plumes. They also wear the badge of the Order – St George’s Cross within the Garter surrounded by radiating silver beams – on the left shoulder. 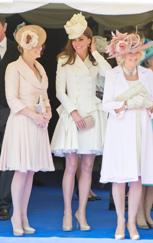 The Duchess of Cornwall looked lovely in a cream Anna Valentine chiffon dress and pale pink coat, with a dramatic Philip Treacy hat. Her shoes were from Stuart Wietzman. All elements of her ensemble had previously been worn on several occasions, including Trooping the Colour and Ascot. To compliment the look, Camilla wore one of her beautiful chokers – the Pink Topaz Choker.

The Duchess of Cambridge wore the same ivory coat dress from Alexander McQueen she had worn or last year’s Trooping the Colour ceremony. She paired the outfit with Jane Corbett hat and her favourite LK Bennett heels. Always a minimalist when it comes to jewellery, Catherine nevertheless wore her lovely Kiki McDonough Green amethyst earrings.

The Countess of Wessex blended in nicely with the two Duchesses in blush pink chiffon dress by Bruce Oldfield and shoes by Jimmy Choo. She had previously worn the same outfit (minus the hat) for the wedding of Zara Phillips and Mike Tindall in 2001.

To learn more about the ceremony, visit this thread – Order of the Garter: Ceremonies and Information.