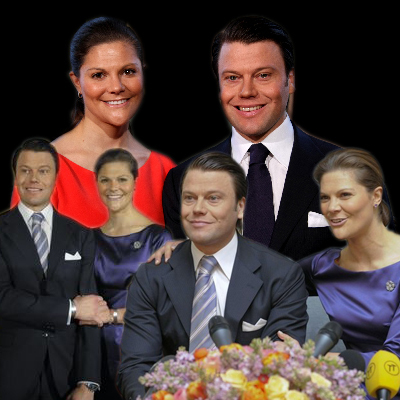 On Tuesday, 24 February 2009, King Carl Gustav of Sweden made the announcement that many have been waiting for: Crown Princess Victoria and Daniel Westling have become engaged. The wedding is scheduled to take place in the early summer of 2010.

There were two appearances made by the couple during their announcement and press conference yesterday.

During the initial announcement with the King and Queen, Crown Princess Victoria looked radiant in a lovely coral-colored dress.

Later in the day, Daniel and Victoria gave a press conference where the couple discussed the marriage proposal, and Victoria showed off her ring. For the press conference, the princess chose a dress in a style similar to the coral dress, but in a lovely deep purple color complete with a cummerbund-style sash, designed by Par Engsheden.

Both dresses were cut in a very elegant, modern yet feminine style. They looked perfect on the radiant princess. Royal watchers throughout the world will undoubtedly be looking forward to seeing what style Victoria selects for her bridal gown. At the end of the conference, a giddy Victoria showed off her new ring.