On This Day: A Future Greek Queen Is Born

One century ago, a baby Princess was born in the German town of Blankenburg am Harz to the Duke and Duchess of Brunswick. She was named Frederica, and forty years later, would become the Queen Consort of the Hellenes.

Princess Frederica, whose full name was Friederike Luise Thyra Victoria Margarita Sophia Olga Cecilia Isabella Christa, was the only daughter of Ernst August, Duke of Brunswick and Head of the House of Hanover, and his wife, Viktoria Luise of Prussia. Her maternal grandfather was the German Kaiser, Wilhelm II; her ancestors included Queen Victoria of the United Kingdom, Christian IX of Denmark and Paul I of Russia. 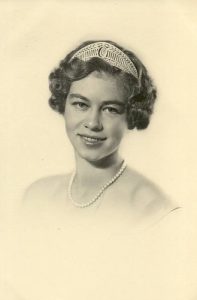 The Princess was educated abroad, in London and Florence. It was during her studies in Florence in the mid-1930s that Frederica began a romantic relationship with her first cousin once removed, Prince Paul of Greece, the third son of Constantine I of the Hellenes and Sophie of Prussia (her great-aunt).

She and Paul were married in January 1938. Paul’s childless eldest brother George was King at the time, making Paul the heir presumptive (he came to the throne in April 1947 when King George passed away). The couple had three children: Sofia, later Queen of Spain; Constantine, last King of the Hellenes; and Irene.

Frederica with Paul and their children, ca 1950

Greece being Greece meant that the Princess’s new family was not sitting on a stable throne: Frederica’s first exile came in April 1941, during the Second World War when the Royal Family was evacuated from the country as it was attacked by Nazi forces. The next years were spent in the United Kingdom, South Africa and Egypt; before the Royal Family was asked to return at the end of 1946. A second, permanent exile followed in late 1967 after her son failed in a countercoup against the military dictatorship that had taken control of the country earlier in the year – the monarchy was abolished in June 1973 and a follow-up plebiscite the next year did not recall it.

Despite the charitable works she undertook in Greece, Queen Frederica was not a popular figure throughout her tenure as Queen Consort and Dowager Queen: she actively meddled in Greek politics to the displeasure of the public, which led to more support for the republican movement. Her German background was also a factor, many believing she had Nazi sympathies during the Second World War (it didn’t help that Frederica, like many German children in the 1930s, was a member of the Bund Deutscher Model – League of German Girls, a stem of the Hitler Youth). The Queen was even booed and heckled during visits to England in the 1960s. Queen Louise of Sweden, whose sister Alice was a member of the Greek Royal Family, wrote in a letter to her brother Lord Louis Mountbatten that she feared “Freddy will end by getting her husband turned out” [1].

After spending her last years between Italy, Spain and India, the Dowager Queen died at the age of 63 in Madrid on February 6, 1981 during eye surgery (the exact reason behind the surgery has been debated for many years). With hard-fought permission from the Greek Government of the day, Frederica was buried six days later at the Royal Cemetery at Tatoi, the Royal Family’s former residence outside Athens. Her family, while granted permission to enter the country for the funeral, had to leave Greece immediately after the burial was completed.

Queen Frederica was survived by her three children and then-six grandchildren (two more were born after her death). Her descendants can be found in the Greek and Spanish Royal Families.