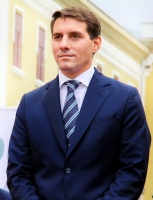 Nicholas Michael de Roumanie Medforth-Mills (born 1 April 1985), since 1 April 2010 styled as Prince Nicholas of Romania, is one of the designated heirs to the defunct throne of Romania according to the new family statute enacted in 2007. He is the eldest child and only son of Princess Elena of Romania and the late Robin Medforth-Mills.

Nicholas was born in Meyrin, a commuter town near Geneva, Switzerland. The family moved to England sometime after Nicholas' birth, and his younger sister, Elisabeta Karina was born in Newcastle-upon-Tyne. Nicholas attended Shiplake College in Henley-on-Thames and later studied at Royal Holloway University of London.

On 30 December 2007 Nicholas' maternal grandfather, King Michael of Romania, announced for Nicholas, the title Prince of Romania with the style of "Royal Highness", which came into effect on Nicholas' 25th birthday, 1 April 2010. By virtue of his new title, he has become a member of the Romanian Royal Family.

View All Members Showing 8 of 8 Member(s)
This group does not have any discussions yet.