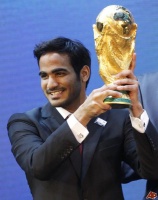 Chairman of Qatar's 2022 Bid Committee
Probably did the most spectacular torch lighting at the Asian games 2006.
His Excellency Sheikh Mohammed bin Hamad Al-Thani has been chosen as ''Arab Sports Personality of the Year" in 2010. (https://www.mbrawards.ae)

He studied at the Qatar Academy, and was a member of the first graduating class at Georgetown University School of Foreign Service in Qatar where he obtained a BA degree on 9 May 2009.Sheikh Mohammed is a former captain of the Qatar equestrian team. (Wikipedia)

Not married and no children as far as we know;-)

View All Members Showing 9 of 9 Member(s)