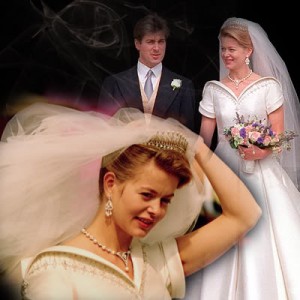 Lady Helen’s wedding dress was designed by Catherine Walker of the Chelsea Design Company, who was a favourite of the Princess of Wales and also the bride’s mother, the Duchess of Kent. image The Tudor style gown fitted perfectly with the surrounding of St George’s Chapel. The pearl-white dress was made from heavy silk featured a fitted bodice and full skirt which formed a six-foot train. image The deep v-neckline and cap sleeves were heavily embroidered with silver diamante and pearls. image This detailing complemented the bride’s jewellery. Holding in place the veil was a diamond and pearl tiara which had been a family heirloom of her mother’s family. image The Duchess of Kent had worn the piece to her own wedding in 1963. Lady Helen also wore a diamond and pearl necklace and matching earrings.

The bride carried a small bouquet of garden flowers which included lavender, cornflowers, rosemary and Vivaldi roses. image The bride was attended by her cousin Lady Gabriella Windsor as well as two flower girls who were Lady Helen’s goddaughters. There were also three pages including the bride’s nephew Lord Downpatrick. The bridesmaid’s pearl-white silk frilly dresses were also by Catherine Walker and they wore a headband of English garden flowers. The page boys wore outfits by Gieves and Hawkes. image

The Duchess of Kent wore an aqua Giorgio Armani silk suit with a net head piece. image Both the Queen, in pale lemon image , and the Queen Mother, wearing blue image , attended the wedding. The Princess of Wales wore a striking green and black suit. image Other notable guests included King Constantine and Queen Anne-Marie of Greece.

The couple have 4 children – Columbus George Donald (1994), Cassius Edward (1996), Eloise Olivia Katherine (2003) and Estella Olga Elizabeth (2004). In 1998, Tim was diagnosed with Hodgkin’s lymphona but has since made a full recovery. Although the couple do not carry out any official engagements they attend all major family functions