On 9th July 1947 an official statement from Buckingham Palace announced the engagement of Princess Elizabeth and Philip Mountbatten. A photo call of the couple was arranged for 10th July followed by the couple carrying out a number of engagements including attending one of the annual Garden parties and the unveiling of Battle of Britain memorial. 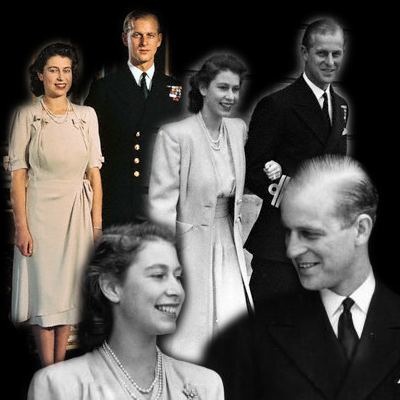 A beautiful Princess Elizabeth emerged in a very simple dress typical of the 1940s style. image1 This was later accompanied by a smart coat and stunning wide brimmed hat. image2 , image3 , image4

Later that evening the Princess and Philip made an appearance on the balcony of the Palace following a private dinner. image5

A few days after the official announcement, the couple made an appearance at a ball in Edinburgh. image6

Official pictures of the couple and her family (the King, the Queen and Princess Margaret) were taken in August 1947. image7 , image8

Philip presented Princess Elizabeth with a beautiful platinum and diamond ring which had been taken from a tiara of his mother, Princess Andrew of Greece. The ring of eleven diamonds consisted of a central solitaire stone of 3 carats with five smaller stones set in each shoulder. When Philip presented the ring to the Princess it was too big and quickly had to be resized in time for the official photo call. image9

More pictures can be seen at this thread.