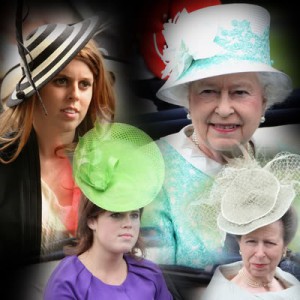 Day 3 – Thursday ‘Ladies Day’
Ladies Day at Royal Ascot saw a large turnout in the carraige procession including the Queen, the Duke of Edinburgh, Sheikh Mohammed bin Rashid Al Maktoum , the Duke of York, The Princess Royal, Princess Haya of Jordan, Princess Eugenie and Prince and Princess Michael of Kent.

The Queen wore a matching dress and coat by her in-house designer Angela Kelly. The outfit of white satin overset with a turquoise lace trim. image The collar of the coat was in a sharks teeth design of white satin. The matching white short brimmed hat with lace trim and satin flower was also by Angela Kelly. image The Queen’s stunning single peral set in a diamond oyster was one of the Queen Mother’s favourite brooches.

The Princess Royal who had divided fashion watchers earlier in the week with her outfits was extremely elegant on Ladies Day. image She wore a pale mint outfit with cowl neckline and a saucer style hat with net trimmings. image

Princess Michael of Kent brought out another favourite outfit which she has worn on numerous occassions since it was first seen at the Queen’s 80th birthday service in June 2006. image The blue satin suit with ballon sleeves was teamed with a patterned silk scarf and a tilted hat with rose detail. image

Princess Eugenie stunned the Ascot crowd with a lime green saucer Philip Treacy hat which sat at the very front of her head. image Observers commented that it looked like a ‘giant green pea’. She teamed this bright hat with a white fitted skirt and purple jacket clinched at the waist with a white belt. image

Following the carriage procession, Princess Beatrice and the Countess of Wessex joined the Royal party.
Princess Beatrice wore a mis-matched white and black outfit. image Her monochrone saucer hat tilted to the side of her head was trimmed with one long feather. image

The Countess of Wessex, attending for her third day presented one of the prizes. She wore a brown and cream polka dot high-necked chiffon dress with a cream jacket with lace details. image Her unusal cream heart-shaped hat with bow looked a bit like a chocolate box. image

Day 4 – Friday
The Queen along with the Duke of Edinburgh were the only royals in the carriage ride. She wore a Karl Ludwig floral silk dress with a lavender coat. image The lavender hat by Angela Kelly was trimmed with red, pink and lime green ribbons. image The Queen wore the diamond City of London brooch.

Day 5 – Saturday
The Queen and the Duke of Edinburgh were again the only royals in the carriage procession which on the final day included England football star Michael Owen. The Queen choose a heavy coat of blue trimmed with a white band. image The white hat was decorated with a blue print and ribbon. image Her sapphire and diamond brooch had once belonged to the Queen Mother

More pictures of Royal Ascot can be seen at this thread.