On the 6th January 1999 the long awaited engagement between Prince Edward and Miss Sophie Rhys Jones was finally announced. image The couple were presented to the press at St. James’s Palace gardens that day. Sophie’s diamond ring was one of the most expensive engagements rings ever in the British royal family. image 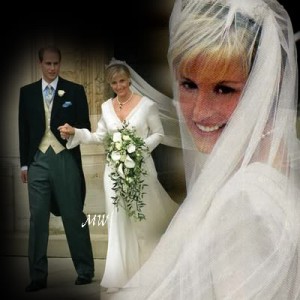 The wedding took place at 5pm on Saturday 19th June 1999 in St George’s Chapel Windsor followed by a reception in the State Apartments at Windsor Castle. Due to the lateness of the wedding, the couple asked the guests to wear long dresses without hats. The Queen who is rarely seen without a hat at a function chose a lilac feather headpiece and some other senior figure such as the Princess Royal and the Duchess of Kent also added a small headdress. image The Queen Mother was the only royal to break the dress code by wearing a hat but considering her age it was appropriate. image The couple had wanted a more private family wedding compared to those of Edward’s siblings. There was a very limited number of foriegn royals invited and only a short carriage ride through Windsor without any balcony appearance that become the norm. This was what the couple wanted and reflected their more relaxed and private lifestyle.

Sophie Rhys-Jones chose the little known designer Samantha Shaw to create her wedding dress. Coincidently Samantha was married only a few weeks before and Sophie had attended the nuptials. Press examined in detail Shaw’s own wedding dress to gather hints about Sophie’s dress and there were a few similarities in the style. Sophie wore a simple medieval style dress-coat made of ivory silk and organza. image The coat had a deep v-neckline, bell shaped sleeves and a long train. image There was heavy detailing of rows of pearls and crystal bead around the neckline and sleeves of the coat as well as trimming the edge. Spotted over the dress were small pearls. An estimated 325,000 cut-glass and pearl beads were sewn onto the coat. image Although there are no pictures, there was a simple plain dress under the coat for the evening party. She wore court shoes by Gina and carried a bouquet of blown ivory garden roses, scented stephanotis, lily of the valley and freesia. image The bride had lost a lot of weight between her final dress fitting and the actual day which did result in a lot of gapping around the neckline.

The full-length tulle veil with crystals was actaully longer than the train of the coat. image The veil was held in place by a diamond tiara which was a wedding gift from the Queen. image The bride’s tiara had come from the Queen’s private collection. The diamond tiara design consisted of three open-work scroll motifs which were remodelled for the wedding by the Crown Jeweller, David Thomas, at Asprey and Garrard. image Although Buckingham Palace have never realised details of the providence of Sophie’s wedding tiara is likely to have been made from the four anthemions that were detachable from Queen Victoria’s Regal Circlet. Sophie continues to wear the tiara at formal functions. Prince Edward present his future wife with a black-and-white pearl cross necklace and a matching pair of black-and-white pearl drop earrings, designed by Edward and made by Asprey and Garrard. image In turn Sophie’s wedding present to Edward was 18 carat yellow-gold Hunter pocket watch on a yellow-gold chain which he wore that day.

Sophie only had two flowergirls Camilla Hadden and Olivia Taylor as well as two pageboys Felix Sowerbutts and Harry Warburton. image They were godchildren of Edward and Sophie’s friends children. Samantha Shaw also designed their outfits. Shaw had taken inspiration from the outfits worn by the Knights of the Order of the Garter which holds its annual service in St George’s Chapel. The two girls wore silk taffeta long-sleeved dresses. On top they wore navy blue velvet tunics with gold braid frogging with a tassel finish. In their hair they wore a velevt cap topped with a white feather and they carried small bunches of flowers. The boys wore ivory silk taffeta long-sleeved shirts, navy velvet knickerbockers with brass-button details and taffeta cummerbunds. They wore similar velvet tunics to the girls as well as the cap with feather. image

The Queen created Edward the Earl of Wessex, Viscount Severn and stated that eventually following Philip’s death and her own he would be granted the title Duke of Edinburgh. The couple decided that any children they would not be styled HRH or take Prince or Princess instead they would use the style of title of the children of an Earl. In 2002, Sophie left her role in PR and began to fully carry out royal engagements. In 2004, Sophie gave birth to a daughter, Lady Louise, and in 2007 a son, James to be known as Viscount Severn. image They spent their 10th wedding anniversary carrying out a number of engagements in Whitton. image

For more pictures and information on the wedding follow this thread.

Filed under The United Kingdom
Tagged Fashion, The Countess of Wessex, The Earl of Wessex, Wedding Anniversary.