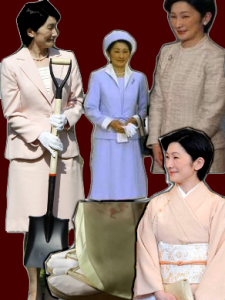 Last month, Prince Akishino of Japan, and his wife Princess Kiko enjoyed a two-week visit to central and eastern Europe in honor of the 140th anniversary of the establishment of diplomatic relations between Japan, Austria and Hungary. The prince and princess also traveled to Bulgaria and Romania, in honor of the 50 years of diplomacy between these two nations and Japan. The elegant 42 year-old princess was the very image of traditional and modern royal style during the visit.

One of the highlights of the princess’ wardrobe during the visit was the beautiful, peach-colored silk kimono that she wore during her visit with the prince to the Klosterneuburg Abbey near Vienna. The kimono, which had short sleeves rather than the familiar trailing sleeves characteristic of kimono for girls and unmarried women, was accentuated by a wide cream and peach-colored obi with floral design and a peach obijime. The kimono had yuzen-dyed floral detail, similar to that on the obi; as is usual for a formal kimono for a married woman, the design was subtle and was mostly below knee height, with some detailing also on the left shoulder. No jewelry was worn to accentuate her outfit, as is the custom when wearing kimono. The peach color complimented the porcelain complexion of the princess. The material looked like a heavy, yet soft silk, and the kimono was perfectly fitted to suit the princess’ slim figure.

Fortunately, Princess Kiko didn’t just wear a kimono in Austria. During her visit to Hungary, she wore another beautiful, traditional kimono in a soft shade of green to a meeting with the Hungarian president, Laszlo Solyom.This kimono had peach, cream, gold, and dark orange yuzen-dyed detail. She wore an obi with a peach and cream-colored geometric karabana design that was accentuated by an obijime in a slightly darker shade of green than her kimono. The floral detail on the kimono again accented the lower part of the kimono and the left shoulder. Again, no jewelry was worn. Princess Kiko completed both outfits with traditional tabi and geta footwear.

The modern clothes worn by Princess Kiko were also in soft, pastel colors that were perfect for spring. When it comes to western-style clothing, the princess leans toward simple, elegant suits. She wore a feminine, round-necked suit in a soft beige color to a meeting with the former king of Bulgaria. The jacket and skirt were made of a fabric that had detail similar to a boucle fabric. She accentuated the suit with a small brooch and pearl earrings.

The princess kept up the pale peach theme by wearing a feminine western-style suit in a similar shade to her kimono during her visit to Romania. This suit had a blazer-style jacket and a-line skirt, which the princess wore with a straight-necked blouse with striped detail under the jacket. An exquisite pearl necklace, white gloves, and cream and white spectator pumps completed the look.

During the visit to Bucharest, the princess was the very picture of retro glamour in a pale blue and white suit and pillbox hat. The suit was a lovely hydrangea-blue with a white collar and cuffs. It had a very feminine slim-belt that had a bow detail at the waist. She wore a straight-necked blouse in the same shade of blue underneath the jacket. The blue pillbox hat and white gloves gave the outfit a very retro touch. Again, the princess perfected the look with her gorgeous pearl necklace and earrings.

Click on the words in bold to see the princess’ outfits.

For more information about Princess Kiko and the Imperial Family of Japan, please visit the forum.