Letizia’s Fashion On Tour in Colombia and El Salvador

Crown Prince Felipe and Crown Princess Letizia embarked on a week long tour of Colombia and El Salvador beginning on the 26th May. Arriving at Bogota airport, Letizia wore a casual beige jacket and grey trousers (she had left from Madrid wearing the same outfit). She accessorised the look with a favourite scarf, her trademark platform shoes from Spanish high-street shop Mango and a Burberry bag. image The couple attended a private dinner that night where Letizia wore a chic black shift dress. image 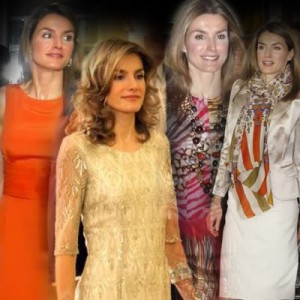 The official aspect of the visit started the next day. At the welcome ceremony, Letizia stood out in a smart red suit which had been one of her favourite outfits of last year. image She changed into a white dress with a satin jacket for the afternoon engagements. image The princess wore a new pair of strappy gold shoes but the the addition of a huge scarf did not fit in with the look. At the official dinner, Letizia looked stunning in a cream beaded dress (first worn at the Prince of Asturias Awards 2007). image

On the second full day of engagements, Letizia looked elegant in a white jacket. image Like many of her outfits on the tour, this had been worn a number of times during the previous year. Whilst meeting the Spanish community at a reception, Letizia wore an unusual print dress. image The new dress divided fashion watchers as it was a bold dress for Letizia to wear. Moving onto to Medellin the following day, Letizia wore one of her favourite looks – the black and white tweed jacket in the style of a Chanel look. image At a later engagement she had removed the jacekt revealing a delicate chiffon blouse. image The white and black combo is a classic smart look and suits Letizia. At a private dinner that dinner, Letizia wore Felipe Varlea’s stunning emerald green shift dress. image Leaving Colombia, Letiza wore a floral blouse and casual beige trousers. image

The couple moved onto El Salvador. At the first engagement of the visit Letizia wore bright orange shift dress which had first been worn when the Crown Prince of Japan visited Spain last July. image The following night at a dinner, the princess surprisingly wore a sparkly sequinned cocktail which had been first worn back in 2004. On this occasion she teamed it with a beige cardigan. image It was great to Letizia repeating clothes from her early months as a princess. At the Presidential inauguration, Letizia wore a simple white shift dress caught in with one of her favourite accessories, a belt. image