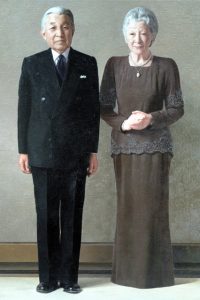 A new oil painting of Their Majesties The Emperor and Empress of Japan was revealed yesterday by the Imperial Household Agency.

The portrait, which took four years to finish, is currently being stored in a repository at the Imperial Palace as it is yet undecided how and where it will be exhibited.

Portraits of the previous emperors – of Meiji, Taisho and Showa – were create in the past, but this new painting is the first of the current Emperor and Empress with their approval.  Previous portraits have been created only when  the Imperial couple when they were Crown Prince and Princess.

Hiroshi Noda was born in 1936 and is an artist of realism – clearly shown in the style of the painting.

2 Responses to A New Imperial Portrait!