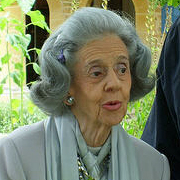 Today it was announced that, last Tuesday, the Belgian newspaper “La Dernière Heure” has received a letter in which Queen Fabiola of Belgium, widow of the late King Boudouin I, is threatened with assasination by crossbow during the Défilé on the next Belgian National Holiday, 21 July. The letter was written in French, but with many spelling mistakes. It is not very coherent or in touch with reality. It accuses the Queen of having had an affair with the Yugoslavian dictator Tito, and says the Queen costs Flanders 30,000 EUR per week, “only to listen to religious music, go to Lourdes and buy herself a place in heaven” (own translation).

The writer says she will be killed with a crossbow on July 21, and the action is claimed by an unknown group. The letter was written on an old typewriter and the envelope had a stamp of 5 centimes, which originates from the 1930’s and contains the image of King Albert I.

The Belgian Minister of Internal Affairs, Guido De Padt, says that, even though the letter is considered to be written by a nutcase (not exactly his words, I’d like to add), the threat is considered serious and the police are investigating the case. The Minister also indicated that the terrible events in Apeldoorn (The Netherlands) of a few weeks ago were probably an inspiration for the writer, and because of that vigilance concerning the Belgian Natinal Holiday is increased.

The Palace has not released any statements concerning this new course of events. Queen Fabiola, who suffered from a long-lasting pneumonia in the beginning of this year, only recently undertook her first event since her illness, when she attended a concert of the Queen Elisabeth Contest.

To find more information about Queen Fabiola, see this thread and this article.
There are also articles about this incident in French and Dutch.