A New Embassy for Bangladesh in Bhutan! 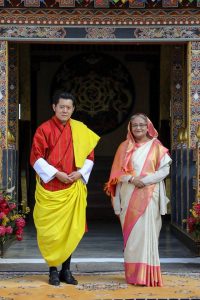 His Majesty King Jigme Khesar Namgyel Wangchuck granted an audience this week to the Prime Minister of Bangladesh, Her Excellency Sheikh Hasina, who has been on a three-day official visit to Bhutan this week.

Her Excellency arrived at Paro Airport on Tuesday and was greeted by Bhutan’s Prime Minister, His Excellency Lyonchhen Ushering Tobgay.  On arrival in Bhutan’s capital, Thimpu, the visiting Prime Minister was then met by members of the Royal Family ahead of a welcoming ceremony at the Tashichhodzong –  the Governmental and Royal Palace – comprising a traditional Chipdrel ceremony and Guard of Honour.

Bhutan and Bangladesh have enjoyed a close friendship for many years, ever since the independence of Bangladesh in 1971.  It was back then that King Jigme Dorji Wangchuck, the Third King of Bhutan, sent a telegram to the Acting President of the Provisional Government of Bangladesh making Bhutan the first country to recognise Bangladesh as an independent state.  However, it wasn’t until 1980 that an embassy was established in Thimpu. 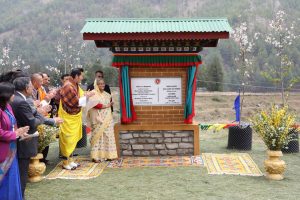 The Embassy itself is now to be rebuilt and so yesterday, 19th April, Bhutan officially gifted a plot of land to Bangladesh for the new building. During a simple ceremony, Her Excellency Sheikh Hasina unveiled the foundation stone with the King, the Bhutanese Prime Minister and officials from both countries in attendance.