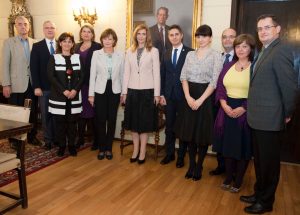 It has been a busy time at the Elisabeta Palace this last week, with several official events taking place. The delightful surroundings of this Palace, set in leafy suburbs north of city centre of Bucharest, provide an excellent backdrop for the many and various official functions that are carried out by members of the Romanian Royal Family. 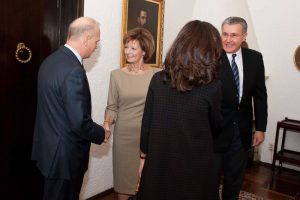 Later in the week, a lunch was held for the Ambassadors of the Italian Republic and the Federal Republic of Germany, both of whom have been visiting Romania as part of a diplomatic mission. Their Excellencies, Ambassador Brasilia Diego and Ambassador Werner Hans Lauk and their wives were greeted at the Palace by the Crown Princess, who was accompanied by her husband, Prince Radu, as well as Princess Maria.

Keeping with the Diplomatic theme, Prince Radu also received the Ambassador of the Republic of Turkey in Bucharest, His Excellency Mr. Koray Ertaş and Professor Enis Tulcea, who presented a copy of his latest book: a biography on King Ferdinand I. 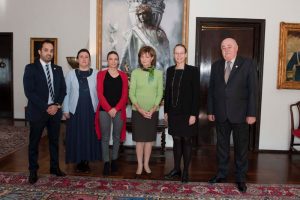 Finally, Crown Princess Margareta, being President of the Romanian Red Cross, received a delegation from the European Regional Office of the International Federation of Red Cross and Red Crescent.

Click on photos for more images of these events.