From Sweden to Bhutan – Day 3 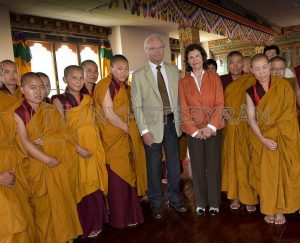 The third day of the Swedish State Visit to Bhutan was spent a number of miles North-East of Thimphu where King Carl Gustav and Queen Silvia visited the city of Punakha, who used to be the country’s capital until 1955.

Whilst travelling there, Their Majesty’s stopped off at the Wolakha convent to see progress of an the United Nations Population Fund project on life-skills and sexual health. The project enables the nuns to be trained on sexual and reproductive health that, in turn, they allows them to teach and advise women living in the area about these issues. Queen Silvia was said to be moved as she listened to some of the life-stories the nuns old her about. A butter-lamp ceremony took place inside the monastery with the local Lama and a representative from UNFPA. 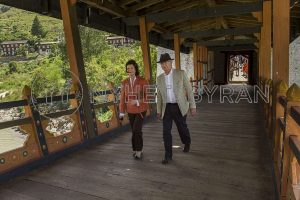 The King and Queen then proceeded to Punakha Dzong, where they carried out an auspicious walk across the Dzong bridge. A second butter-lamp lighting ceremony took place alongside the monks inside the Kuenray Hall (prayer hall).

On the way back to Thimphu, King Carl Gustav and Queen Silvia visited the village Bjära, a tiny hamlet of around 40 inhabitants living in eight households. 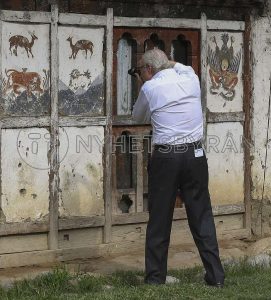 Their Majesty’s handed over a water pump, which will allow the rice fields surrounding the village to be irrigated more efficiently. The visit gave the King and Queen time to relax for a while after two busy days in Bhutan and King Carl Gustav took the chance to take photographs himself.

In the evening, the Prime Minister of Bhutan Tshering Tobgay and his wife Tashi Doma hosted a dinner for the royal guests.  He thanked the King and Queen for their visit and wished them a safe journey back to Sweden. He stated that the visit will be remembered for “strengthening the ties of friendship between our two kingdoms”.

For more news, discussion and photos of this visit, please click here!