From Sweden to Bhutan – Day 2 continued! 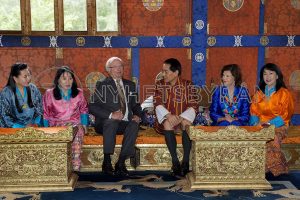 As mentioned yesterday, King Carl Gustav and Queen Silvia of Sweden had a busy first full day of their State Visit To Bhutan with several events attended throughout the day.  So here is a short update of the remaining events Their majesties attended!

It was at the Dechenchholing Palace where the King and Queen of Sweden met the Fourth Druk Gyalpo, King Jigme Singye Wangchuck for lunch.  Three of the former king’s wife were also there: Tshering Yangdon Wangchuck, the mother of King Jigme Khesar Namgyel Wangchuck,  Tshering Pem Wangchuck and Dorji Wangmo Wangchuck who is a keen author and has had published two books about her homeland.  The Dechenchholing Palace is located north of the Bhutan’s capital, Thimpu, and was built in 1953 by the current King’s grandfather, King Jigme Dorji Wangchuck. 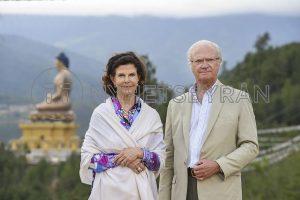 Later,  King Carl Gustav and Queen Silvia visited the Kuensel Phodrang Nature Park on the southern outskirts of Thimphu to view the magnificent Buddha Dordenma statue and afterwards they went on to see progress on a development project for the building of a fire break, which will encircle Thimphu.