Their Majesties the Emperor and Empress of Japan have today visited Nagano Prefecture in central Japan where they attended the 67th National Tree Planting Festival by planting several trees. 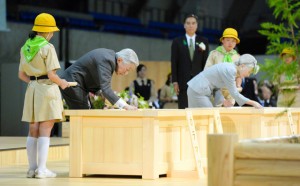 Nagano Prefecture is right in the heart of Japan.  Completely landlocked and mountainous, it became renowned as an excellent location for winter sports after the 1998 Winter Olympics were held there.  The National Tree Planting Festival took place at the Nagano Olympic Memorial Arena (M-WAVE). 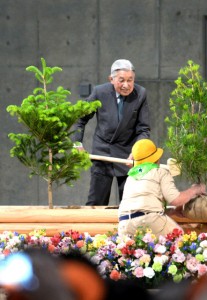 Amongst the trees planted by the Imperial Couple, Emperor Akihito planted Hinoki Cypress trees and Empress Michiko – wearing a grey and white outfit with silver and pearl accessories – planted Shinanoki Linden trees. Afterwards, they sowed the seeds of several types of tree including Karamatsu Larch.

During the event, a period of silence was observed in commemoration of the victims of the recent earthquakes that affected areas around Kumamoto Prefecture in the south.

Later on, the Emperor and Empress met residents of the village of Sakaemura who suffered the affects of a strong earthquake in 2011 the day after the Great East Japan Earthquake. They heard how the village has almost been completely restored and how grateful the residents were that they had not been forgotten by their Imperial visitors.