A Nostalgic Visit for the Emperor and Empress

Yesterday, 31st May, Emperor Akihito and Empress Michiko of Japan visited the Tokyo Metropolitan Koganei Park in the Western suburbs of Tokyo for a nostalgic visit to where His Majesty spent some of his youth living and going to school. 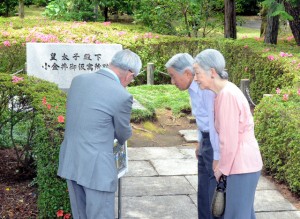 During the war years, the then Crown Prince Akihito attended Gakushuin Secondary School in the Mejiro district of Tokyo, which was destroyed in an air-raid during the war. The school was subsequently re-located to Koganei Park with a temporary palace for the young heir to live in close by. 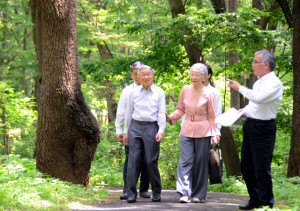 A monument now stands where the temporary school was situated and the Emperor was able to recall his memories of the time and describe to the Empress several anecdotes. Whilst looking at an old aerial photograph of the area, the Emperor described with nostalgia some of his memories to the Empress, recalling the moment when a bolt of lightening struck a tree whilst he was sitting at his desk and there being many pine trees and wheat fields in the area. 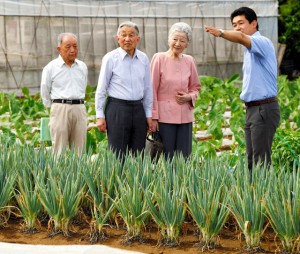 Later, Emperor Akihito and Empress Michiko, who was wearing a casually elegant outfit of grey trousers and a pink/peach coloured tunic-style jacket, walked along the tranquil wooded paths in the dappled light of the sunshine, before arriving at the park’s small farm to view the produce.