His Royal Highness the Prince of Wales is currently in Romania and was received by Crown Princess Margareta of Romania and Prince Radu during the start of his latest visit to the country he is so fond of.  In his usual gallant style, Prince Charles kissed the Princess’s hand during the warm and friendly greeting outside the Palace gates, before the royal party walked along a red carpet and past uniformed guards on horseback towards the Palace entrance. 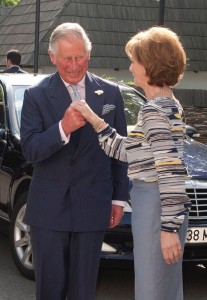 The Custodian of the Crown of Romania was elegantly dressed in a grey, black and yellow outfit in preparation for her visit later in the day to the children’s hospital with Princess Muna.

Taking a tour of the Elisabeta Palace Art Gallery, Prince Charles admired a collection of costumes worn by Queen Maria and Queen Elena and then proceeded to the palace garden to see how the maple tree he planted back in 2011 was doing.  Joining the royal party was Princess Muna who, of-course is also visiting the country for a few days.  It seems that the tree has grown very well if the looks on the royal faces is anything to go by! 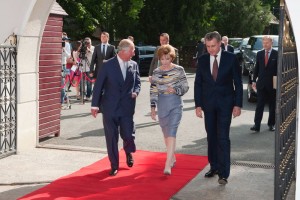 According to the Royal Family of Romania website, Prince Charles has passed on his warmest wishes for the health of King Mihai and Queen Ana, who reside in Switzerland.

With two overseas royal visits at once, it is busy days indeed for the Romanian Royal Family, but all managed perfectly and with great style as always! 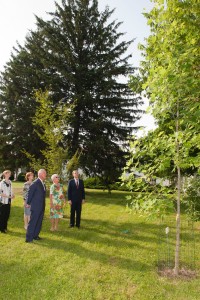