Her Royal Highness Crown Princess Margareta of Romania has hosted a formal reception in the Hall of Kings at the Elisabeta Palace, in honour of Her Royal Highness Princess Muna al-Hussein of Jordan’s visit to Romania. Prince Radu, Princess Maria and various dignitaries from Romania’s academic, diplomatic and cultural fields were also in attendance. Wearing a beautifully fitted dress of green lace, the Custodian of the Crown made a formal welcome speech as did Prince Radu. The reception included the cutting of an exquisite and very delicious looking cake! 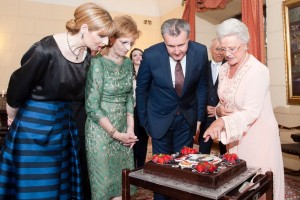 Earlier, Crown Princess Margareta took Princess Muna to visited the Grigore Alexandrescu Emergency Hospital for Children in Bucharest where the royal visitors met hospital officials and took a tour around the bright and modern facilities.

Princess Muna looked radiant in a bright, spring-like outfit comprising a woven green jacket and floral dress, which matched perfectly with the beautiful bouquet of flowers she received during the visit. 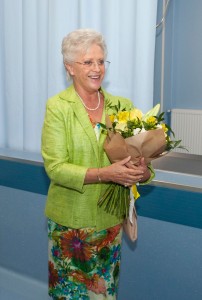 During her visit to Romania, Princess Muna will also visit Peles Castle where she will receive the Grand Cross of the Order of the Crown of Romania in a special ceremony held in the Hall of Honour.

A formal dinner will also take place – hosted once again by Crown Princess Margareta and Prince Radu – where Princess Muna will meet the Ambassador of the Hashemite Kingdom of Jordan, members of the diplomatic corps accredited in Bucharest and representatives of state institutions.

For more photos of these events, please see the Royal Family of Romania website.