Her Royal Highness Princess Muna al-Hussein of Jordan has arrived in Romania at the invitation of Her Royal Highness Crown Princess Margareta for an official visit centering on Children’s Day, being celebrated around the world on 1st June.  Upon her arrival in Romania, Princess Muna looked elegant in a bright yellow jacket and floral skirt as she was greeted by Prince Radu at the airport. 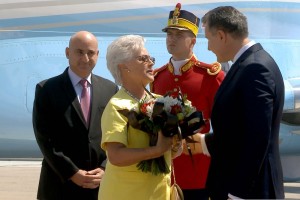 A special children’s event called “The Feast of Children” was held the Elisabeta Palace in Bucharest with hundreds of children, parents and teachers in attendance with Princess Muna attending as guest of honour.  The children enjoyed dancing, songs, drawing and karate and then later tasted some well deserved treats after a morning of play in the gardens of the Palace. 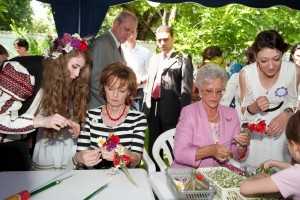 For more than 50 years, Princess Muna has supported the vital need of education and better health amongst children in Jordan and she is the Honorary President of the College of Nursing at the Mutah University in Jordan.  Princess Muna first visited first Romania in 2006 and she is Patron of an annual Medical Congress which is held alternatively in Jordan and Romania. 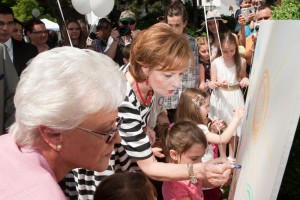