On 18th May, Her Imperial Highness Princess Mako of Akishino visited the research vessel “Kaimei” (meaning “enlightened”) which is currently docked at the Ariake Pier in Tokyo harbour.

The vessel belongs to the Japan Agency for Marine-Earth Science and Technology, whose website states that the vessel is the most advanced of its type in the world with technology allowing researchers to look into the origins of mineral and ore deposits as well as being able to contribute to research relating to climate change and to the prevention of the risks associated with earthquakes and tsunamis. 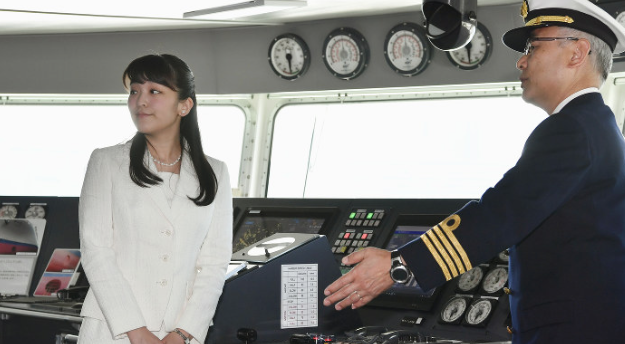 The visit was clearly both informative and fun for the Princess as she took a keen interest in some of the mineral samples pulled from the sea bed around Japan’s coasts, as well as being shown the ship’s controls on the bridge.  Then,  back on deck in the sunshine, Princess Mako looked elegant in a fitted cream suit and pearls as she sounded the ship’s bell – clearly taken aback with surprise and laughter at the loud chime it made!