Busy May Days for the Emperor and Empress!

Last week, it was reported by Japanese news organisation, Mainichi, that the number of meetings and audiences attended by Emperor Akihito and Empress Michiko at the Imperial Palace would start to be reduced throughout the next year or so and that some of them will instead be carried out by Crown Prince Naruhito and Crown Princess Masako.

Even so, Their Imperial Majesties have had a busy May so far with a round of events and official engagements carried out already!

On May 11th, Emperor Akihito conferred Orders at the Imperial Palace – always a very formal affair with the Emperor wearing morning suit. 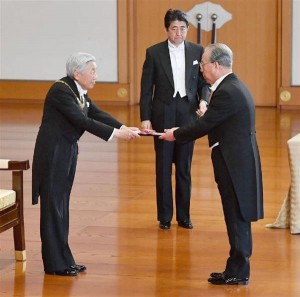 View the full image at Sankei

The next day, both the Emperor and Empress Michiko an exhibition to see paintings by renowned Japanese Artist, Seiki Kuroda.

May 12th was a day of ceremony and possibly nostalgia for the Imperial couple as they attended an event in Tokyo for the 100th anniversary of the establishment of the International Karuizawa Tennis Tournament. Tennis has long been a passion for them as they have always been keen players and enjoy the game immensely. Who could forget that almost 60 years ago, the then Crown Prince Akihito and Michiko Shōda met during a game of tennis! 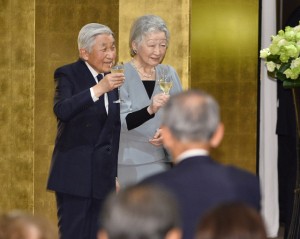 Later on, during the evening of the 12th, the Berlin Philharmonic Orchestra performed a concert as part of 21st tour of Japan to which both the Emperor and Empress attended.

Another musical event took place on Tuesday night at the Tokyo Opera City Concert Hall in the Shinjuku-ku district of the city. This time, Empress Michiko, wearing an elegant two-tone grey silk outfit, went on her own to hear Argentinian pianist Martha Argerich play Beethoven. 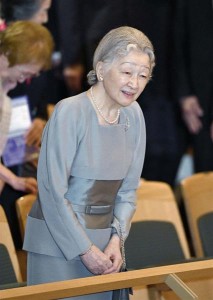 The video below shows Their Imperial Majesties attending the Berlin Philharmonic Orchestra concert amid much applause!