Their Imperial Highnesses, Prince Akishino and Princess Kiko of Japan continued their official visit to Italy yesterday when they visited the city of Florence. 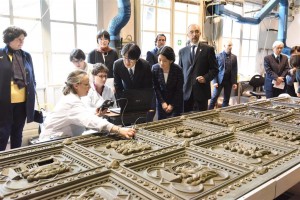 The Prince and Princess in Florence

Famed for its exquisite architecture, museums and art galleries, it is thought to be the birthplace of the Renaissance. Florence is also renowned as place for the restoration of ancient and rare art and artefacts – in Italy itself and from around the world.

And so is was that Their Imperial Highnesses visited the Opificio delle Pietre Dure where restoration laboratories are housed and where some of the worlds most incredible masterpieces are being restored, such as Leonardo da Vinci’s Adoration of the Magi and the magnificent South Gate of the Baptistery by Andrea Pisano’s. The latter piece is being painstakingly restored to bring it’s gilded pattern back to its original glory. 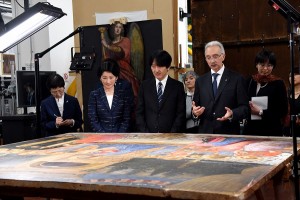