Their Majesties King Jigme Khesar Namgyel Wangchuck and Queen Jestun Pema of Bhutan, together with other members of the royal family attended the first day of a special event in Bhutan called a “Tsechu” at the grounds of the Dordenma (sacred Buddhist statue) in Kuenselphondrang, just south of the capital city of Thimpu.

Teschus are colourful religious festivals listing for several days and held throughout the year in each district of the country. They form a vital part of social bonding by bringing people from remote areas together in one large gathering. During the festivals, sacred “Cha,” dances are performed by participants wearing colourful costumes and fascinating masks. This particular Tsechu is dedicated to the birth of HRH Prince Jigme Namgyel Wangchuck. 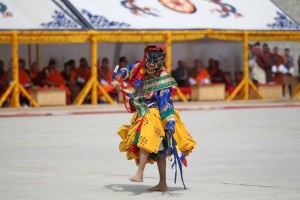 HM the King clearly enjoyed attending the event and since he is known for being a keen photographer, it was no surprise to see him taking a number of pictures himself, using an antique camera.