Described as “an incredible affair” that “left such a mark on people” by Monaco’s Prince Albert II, today marks the sixtieth anniversary of the marriage of Prince Rainier III of Monaco and Hollywood actress Grace Kelly.

The elaborate religious wedding ceremony that took place on April 19, 1956 at the Cathédrale de Monaco has gone down as one of the most famous weddings of the 20th century that was watched live by over 30million people and covered by 1,500 reporters from around the globe.

Rainier and Grace were married by the Bishop of Monaco, Gilles Barthe, in front of over 600 guests including royalty, socialites and Hollywood heavyweights. Grace arrived to the Cathédrale with her father, John B. Kelly, and made her way up the aisle accompanied by seven bridesmaids clad in buttercup yellow organdy dresses, four flowergirls and two pageboys.

The couple exchanged vows during the High Mass ceremony, in which Prince Rainier had trouble putting the wedding ring on his bride’s finger (the lot of a nervous groom!).

Exiting the Cathédrale to enormous cheers, the new Princess of Monaco and her husband drove in a 1956 open-top Rolls Royce towards the Chapel of Saint Dévote, where – following tradition – Grace laid her Lilles of the Valley bouquet at the altar of Monaco’s patron saint. They then made their way back to the Prince’s Palace for the wedding reception.

Guests were treated to a feast of lobster and caviar, with innumerable bottles of champagne, at the reception in the Palace Courtyard. A six-tier wedding cake that highlighted aspects of Monaco’s history was the centrepiece of the event, and guests were each given slices to take home in silver paper boxes.

By far the most memorable and iconic aspect of the wedding was the new Princess’ wedding gown, designed by the head costume designer of MGM Studios, Helen Rose. 36 seamstresses worked for six weeks to craft the gown which was made of Brussels rose point lace over a century old, silk faille and taffeta and was adorned by thousands of hand-sewn seed pearls.

Design elements included a high-neck, full-length lace sleeves that matched the lace-covered bodice and a bell-skirt that required three petticoats to maintain its shape. A silk cumberband brought the two parts of the dress together.

A tulle veil edged with lace was held in place by the bride’s Juliet cap, which was decorated with floral lace and pearls matching the small prayer book Princess Grace carried in her hands. 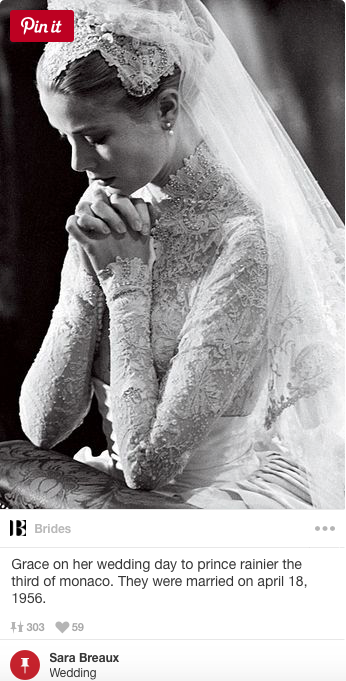 The overall effect was one of timeless elegance and femininity, which in conjunction with the other elements of the event and the excitement of a Hollywood Princess becoming a real Princess is what led to the iconic status of this wedding.