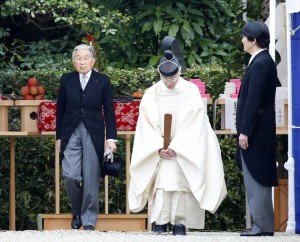 Their Imperial Majesties, Emperor Akihito and Empress Michiko spent the weekend in Kashihara, Nara Prefecture in Japan to take part in official ceremonies to commemorate the 2,600th anniversary of the death of Emperor Jimmu.  The ceremonies formed part of the annual Shinto rites that Emperor Akihito and the Imperial family is obliged to perform and through which ancestors are honoured and worshipped. 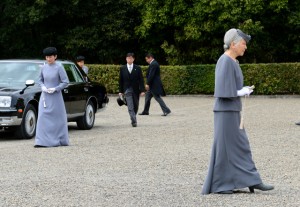 Emperor Jimmu’s life is shrouded in myth and legend, but ancient chronicles credit him with being Japan’s first emperor all those years ago.  He is said to have come to the throne is Kashihara at the place where the Kashihara Shrine (Jingu) is built, which honours him.  A short distance away is his tomb.

The Imperial Couple visited both these places and were accompanied by Prince Akishino and Princess Kiko.