Victims of Tuesday’s terrorist attacks in Brussels were remembered with a minute’s silence at the Belgian Embassy in Luxembourg today, the vigil attended by Hereditary Grand Duke Guillaume and his Belgian-born wife Stéphanie.

At 12:15pm the 300-strong crowd fell silent in honour of the 31 people who were killed in the attacks. 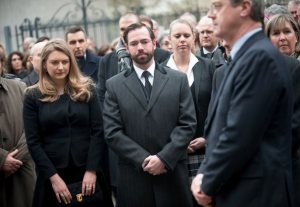