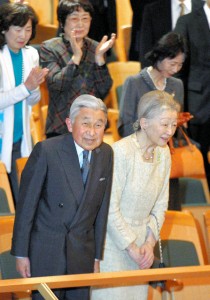 Emperor Akihito and Empress Michiko of Japan attended a charity concert in support of the reconstruction of areas hit by the Great East Japan Earthquake and subsequent tsunami, which struck Japan five years ago.
The concert took place at the Tokyo Opera City Concert Hall in the district of Shinjuku-ku, Tokyo, where their Imperial Majesties watched performances by students from the Fukushima Prefectural Asaka High School, Koryiyama City, together with pianist Izumi Tateno and vocalist Ken Nishikiori.
One of the songs performed was Hana wa Saku (Flowers Will Bloom), a now famous song written just after the earthquake tragedy to help build public support for the rebuilding efforts.
At the end of the concert, the Emperor and Empress spend time meeting with the students.
Filed under Japan
Tagged Emperor Akihito of Japan, Empress Michiko of Japan, Japan.