Queen Paola and Crown Princess Mathilde of Belgium were an elegant duo during the first of the New Year’s receptions, on 13 January 2009 at the Royal Palace in Brussels. The two ladies looked very chic in dark colors (photo 1, photo 2, photo 3 – ANP).

During the second of the receptions, on 15 January 2009, Crown Princess Mathilde looked resplendent in a red coat-dress and dragon-fly brooch (photo 1, photo 2 – Belga).

Last, but certainly not least, the New Year’s reception for EU officials at the Royal Palace in Brussels on 21 January 2009, with the Queen once again in a dark suit while Mathilde opts for a more striking effect in black and white (photo 1, photo 2 – Belga). 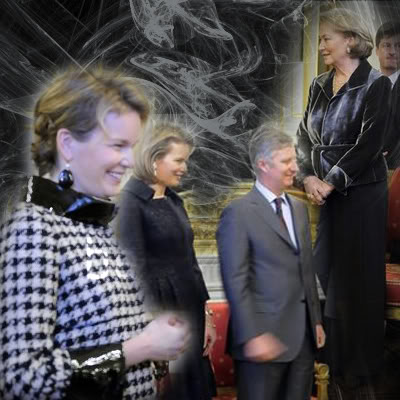