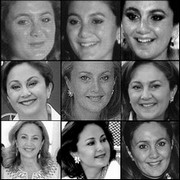 She was born on September 15, 1964 in Amman. She is the daughter of Tawfik al-Tabbaa and Lamia Addem. Her father was the founder and president of the Royal Jordanian Airlines.

On August 9, 1987 she married Prince Faisal bin Al Hussein, the second son of the late King Hussein and Princess Muna, at Zahran Palace after a short courtship. The couple divorce in 2008 and have four children: Princess Ayah, Prince Omar and twin Princesses Aisha and Sarah.

Princess Alia studied at the Ahliyyah School for Girls in Amman. She also attended the University of Sussex, where she studied International Relations.

Her Highness collaborates with a few associations in Jordan and she is the President of the Promise Welfare Society, the Multiple Sclerosis Foundation and the Cerebral Palsy Foundation.