Princess Haya was born on May 3, 1974 in Amman. She is the daughter of the late King Hussein I (1935-1999) and his third wife, the late Queen Alia (1948-1977). She was named after King Hussein’s aunt.  Princess Haya has one brother, Prince Ali, and one sister, Abir Muhaisen, who was adopted when she was one year old. She also has nine half siblings: King Abdullah, Prince Faisal, Prince Hamzah, Prince Hashim, Princess Alia, Princess Zain, Princess Aisha, Princess Raiyah and Princess Iman. 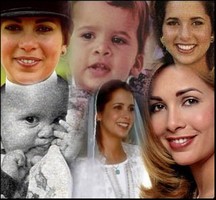 The Jordanian Princess lost her mother when she was two and a half years old. Queen Alia died in an helicopter crash (for more information, read this blog entry) when she was returning to Amman after engagement.

Princess Haya studied first in Amman and later in the United Kingdom, where she attended Badminton School for Girls in Bristol, Bryanston School in Dorset and St Hilda’s College, Oxford University, from which she graduated with a BA honours degree in philosophy (PPE).

Since she was a girl, Princess Haya has ridden horses. At age 13, she became the first female to represent Jordan internationally in equestrian sport jumping. The Princess participated in the 2002 FEI World Equestrian Games in Jerez de la Frontera, Spain and the 2000 Summer Olympics in Sydney, Australia representing Jordan in show jumping, where she was also her country’s flag bearer. Additionally she is the individual bronze medalist of show jumping in the 1992 Pan Arab Games in Damascus, Syria.

In 2006 she became the president of the International Equestrian Federation (FEI) and one year later she joined International Olympic Committee (IOC). She made history in 2010, when she was re-elected President of FEI in November 2010 for a second four year term.

In memory of her mother, Princess Haya founded Tkiyet Um Ali in 2003, the first food aid NGO in the Arab World. Two years later she was appointed Goodwill Ambassador of the World Food Programme.

On 10 April 2004, Princess Haya married Sheikh Mohammed bin Rashid Al Maktoum, the ruler of Dubai, in a private ceremony at Al Baraka Palace in Amman. They knew each other long before but they started a relation after they meet at the World Equestrian Games in Spain in 2002. Sheikh Mohammed and Princess Haya have two children:  Sheikha Al Jalila (born December 2, 2007) and Sheikh Zayed (born January 7, 2012).

To celebrate this anniversary, the former official photographer of the Royal Family of Jordan, Zohrab Markarian, will publish a photography book about the Princess.

One Response to Princess Haya Turns 40