On This Day: Death of Margaret of Prussia

Today marks the sixtieth anniversary of the death of the Dowager Landgravine of Hesse, Margaret of Prussia. 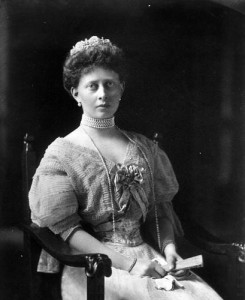 Born in April 1872 at the New Palace in Potsdam, Princess Margaret was the youngest child of Frederick III, German Emperor and Victoria, Princess Royal. Her siblings were the future Wilhelm II, Charlotte of Saxe-Meiningen, Prince Heinrich, Prince Sigismund, Viktoria of Schaumburg-Lippe, Prince Waldemar and Sophie of Greece. Her godparents were Emperor Pedro II of Brazil and Crown Princess Margherita of Savoy.

As a child, Princess Margaret spent most of her time with the siblings closest to her in age – Viktoria and Sophie (Waldemar died at 1879). The trio were very close to their mother, in contrast to their three eldest siblings. Mossy, as she was known since infancy, was a popular member of the family.

A portrait of a young Princess Margaret with the two sisters closest to her in age; Viktoria and Sophie

Princess Margaret married Prince Frederick Charles of Hesse-Kassel on January 25, 1893 at the Hohenzollern Stadtschloss. The newlywed pair moved into Schloss Rumpenheim, the family residence of the Hesse-Kassels. Margaret and Frederick Charles became parents later in the year of the marriage, when the first of their six sons was born – Prince Freidrich Wilhelm. He was followed by Maximilian (1894), and two sets of twins, Philipp and Wolfgang (1896) and Richard and Christoph (1901). It was remarked at a dinner party attended by Princess Margaret during one of her pregnancies that, despite there being an 13 people seated at the dinner table (an unlucky number), superstition would not befall upon the party as the Princess was expecting.

In 1901, following the death of her mother, Empress Frederick, Mossy inherited Schloss Friedrichshof. The family of eight moved into the Palace, as Mossy wished to maintain her mother’s legacy. However, after 1925, the family were no longer living in the main castle building, but in the smaller cottage-style residences on the palace grounds.

Princess Margaret of Prussia and her fiance, Prince Frederick Charles of Hesse

Princess Margaret became the Landgravine of Hesse in 1925, when her husband’s older brother, Alexander Frederick, relinquished his position as Head of the House of Hesse. For three months in 1918, Mossy was also the Queen of Finland, after Prince Frederick Charles accepted the position before stepping aside because of the after affects of World War One. Her husband died in 1940.

The Landgravine’s family was heavily impacted by Germany’s involvement in both World Wars. Her two eldest sons were killed in action during World War One. Two other sons would heartily embrace Nazism in the late 1930s and 1940s, with Prince Philipp even being appointed to Adolf Hitler’s personal staff due to his personal connection to the King of Italy (Philipp’s wife, Mafalda, was the King’s daughter). Prince Philipp and his family were later imprisoned in the Flossenbürg and Buchenwald concentration camps. Prince Christoph was killed in an airplane accident in Italy in 1943, after serving in the Nazi airforce.

Margaret lived the rest of her days following the war at Friedrichshof, surrounded by her remaining children and grandchildren. On her death on January 22, 1954, she was the last surviving child of Frederick and Victoria.

2 Responses to On This Day: Death of Margaret of Prussia