The Issa Label and the Young British Royals

Daniella Issa Helayel, Brazilian designer who created the fashion label Issa has become one of the main designers used by Kate Middleton. image1 Whilst Kate may not yet be a royal, the Issa label is also a favourite of Prince William’s cousins Princesses Beatrice and Eugenie of York as well as many other celebrities. Issa is known for its collection of beautiful silk patterned wrap dresses in bold prints (image2) or lovely floor-length evening gowns. (image3 – Pippa Middleton in a classic Issa evening gown attending the End of Summer Ball in Berkeley Square 2008) A deep plunging neckline is also a feature in many of Issa’s designs. image4 An average dress from the label will cost between £400 and £1000. 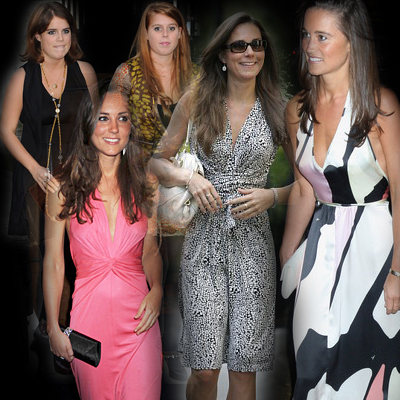 Having Kate being photographed in Issa designs has brought an increase in the amount of press attention to the label. Articles about the label will most likely refer to it being “Kate’s favourite designer” and to an extent she has become an “unofficial muse”. Kate has chosen to showcase Issa designs at a number of high profile events. Last June at the Boodles Boxing event attended by William, Harry and Chelsy Davy, Kate stepped out in a show-stopping coral floor-length gown with plunging neckline. image5 Another Issa dress was worn to the wedding of Peter and Autumn Phillips in May 2008, where Kate received a lot of media attention due to her attendance without Prince William. image6 , image7 At the Concert for Diana on 1st July 2007 Kate again choose another Issa creation of a white trench coat with white lace dress underneath. image8 This occasion was the first time she had been photographed with William since their ‘split’ that April and obvioulsy received huge press cover across the world. One of Issa’s signature pieces is the “Lucky” dress which Kate Middleton has worn on numerous occasions. image9 The dress comes in a number of colours and Kate has worn the black version with the sheer back (image10) as well as a white version with a closed back which she wore to Wimbledon 2008. image11

The Issa label is also favoured by Princesses Beatrice and Eugenie who attended the catwalk show of the spring/summer 09 collection during London Fashion week in September 2008. Naturally the two princesses turned up at the event in Issa creations image12 Princess Beatrice also wore an Issa dress to the society wedding of Choice Delevigne and Louis Buckworth on 7th September 2007. image13

Issa’s dresses are beautifully tailored and tend to suit most people especially the classic style of Kate Middleton. We will have to wait and see whether Kate continues to wear Issa and maybe it might even become her “label” in her possible future royal life.

More information on the designer can be found at the Issa website.

Filed under The United Kingdom
Tagged Fashion, In-Laws, Princess Beatrice of York, Princess Eugenie of York, The Duchess of Cambridge.