Historical Royal of November: Elisabeth of Hesse and by Rhine

November’s spotlighted royal is Her Grand Ducal Highness Princess Elisabeth of Hesse and by Rhine, who became Her Imperial Highness Grand Duchess Elizaveta Feodorovna of Russia upon marriage in 1884.

Alice of Great Britain and her newborn daughter, Ella

Princess Elisabeth was born on November 1st, 1864 in Hesse, the second child of the future Grand Duke Louis IV of Hesse and Princess Alice of the United Kingdom. She had an older sister, Princess Victoria, with five more siblings following her birth – Princess Irene, Prince Ernst Louis, Prince Friedrich, Princess Alix and Princess Marie. Within the family, the young Elisabeth was known as ‘Ella’. The family lived in Darmstadt, and were raised – much like many other grandchildren of Queen Victoria – in an English manner.

Ella’s childhood was marred by tragedy. In 1873, her youngest brother Friedrich died after falling out of a window in his mother’s bedroom. Five years later, at 14, Ella lost both her youngest sister Marie and her mother Alice when diphtheria spread through the New Palace in Darmstadt, affecting everyone in the family except for Ella herself who was sent to stay with her grandmother, Grand Duchess Elizabeth. The death of Grand Duchess Alice altered the dynamic of the family – Grand Duke Louis mourned his wife deeply, and Queen Victoria increased her influence on the upbringing of her Hessian grandchildren, ensuring Ella and her siblings spent time in England with her.

As she entered her late teens and early twenties, the Princess was renowned as one of the most beautiful women in Europe, and her beauty captured not only the attention and admiration of her first cousin, Princess Marie of Edinburgh (later Queen of Romania), who wrote in her memoirs, “There was something of a lily about her; her purity was absolute; one could never take one’s eyes off her,” and called her “Ella the beautiful“, but also those of the future Emperor of Germany, Wilhelm II (her maternal first cousin), and the future Grand Duke of Baden, Frederick II. But it was the Russian Grand Duke Sergei Alexandrovich who won Ella’s hand, after the pair grew to knew each other during visits to Heiligenberg. Sergei proposed marriage to Ella on two occasions, the Princess only accepting on the second time after she saw the same grief in him following the death of his parents (Tsar Alexander II and Tsarina Maria Alexandrovna) that she had felt after her own mother’s death a decade earlier. 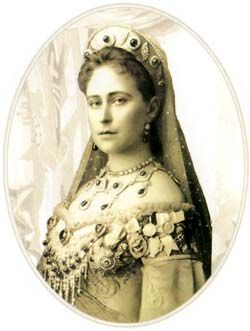 Ella and Sergei were married in both a Russian Orthodox ceremony and a Protestant ceremony on June 15th, 1884 at the Winter Palace in St Petersburg, and set up home in the Beloselsky-Belozersky Palace. Ella’s wedding gown was a traditional Russian court dress, in white and silver. The new Grand Duchess Elizaveta Feodorovna quickly became a popular figure in Russian society, both for her charity work and her beauty. Her conversion to Russian Orthodoxy also increased her popularity, her Russian in-laws were very much pleased with her efforts. Over the course of their twenty-year marriage, Ella and Sergei did not have any biological children. They did become the carers of Grand Duchess Marie Pavlovich and Grand Duke Dmitri Pavlovich, the children of Sergei’s brother Paul. Ten years after her own entrance into the Romanov fold, Ella’s younger sister Alix married the new Tsar, Nicholas II – Sergei’s nephew.

Grand Duchess Elizaveta’s life was once again hit by tragedy in February 1905, when her husband was assassinated by the revolutionary Ivan Kalyayev. The Grand Duchess was remarkably and unnervingly calm in the immediate aftermath of Sergei’s death, she received visitors, but according to her niece Marie, “looked without ever seeing them” (Marie also described her time in her aunt’s care as cold and distant). Grand Duke Sergei’s assassination propelled Ella towards her religious work: she either sold or returned to her in-laws all her magnificent jewels and possessions – including a stunning diamond and emerald kokoshnik set which she received as a wedding gift – and founded the Martha and Mary Convent of Mercy to assist wounded soldiers and orphaned children.

Ella during her time as a nun

For the next decade, Ella worked as a nun in her convent, erecting a hospital and an orphanage within the grounds as the organisation assisted the sick and poor. Much like the rest of the Romanov family, the outbreak of World War I signified the beginning of the end of the Imperial House of Romanov, and of Ella’s own life. After having taken Tsar Nicholas, his wife and children – amongst others – into house arrest and exile in Yekaterinburg, the Cheka also arrested Grand Duchess Elizaveta and sent her to Alapaevsk. She and her party were ordered to be killed on July 17th, and the following day, the group were beaten and thrown down a mine shaft. Their bodies were discovered in October, when the White Army took control of the town. Ella’s remains were transported and laid to rest at the Church of Maria Magdalene in Jerusalem, the Russian Orthodox church built to honour Empress Maria Alexandrovna.

In 1992, after the fall of Communist Russia, the Moscow Patriachate canonized Ella as the New Martyr Elizabeth.

Despite not being an incredibly well-known royal or one with much power, Ella was a remarkable figure in the overall history of the late 1800s – had her choices been different, the course of European history may have been altered. What would have happened if she had married Wilhelm II – would he have been a better leader, less rash and controlling? Would Ella have introduced haemophilia into the Prussian royal family? Or, like with Sergei, would she not have had children, leaving the Prussian House to the children of Wilhelm’s brother Henry? Had she not married Sergei, would Nicholas and Alix have had enough support to marry, thereby dramatically changing the Romanov family? The linkages between Ella and the various European royal houses are great, and had they been different, a lasting impact on European history may have occurred.

If there are any specific royals who you would like to see featured in our Historical Royal of the Month series, please leave a comment below.

7 Responses to Historical Royal of November: Elisabeth of Hesse and by Rhine