King Albert II and Queen Paola of the Belgians today attended the first funeral of victims of last week’s Swiss bus tragedy. They were joined by the Prince of Orange and Princess Máxima of the Netherlands, and President Eveline Widmer-Schlumpf of Switzerland.

The service took place at the 5,000-seat Soeverein Arena in Lommel, in northern Belgium where one of the schools involved is located. Among the crowd were Belgian Prime Minister Elio Di Rupo, various Belgian and Flemish ministers, members of the Swiss rescue team and of course, family and friends of the victims, who requested that photographs should not be taken apart from those by the official photographer. 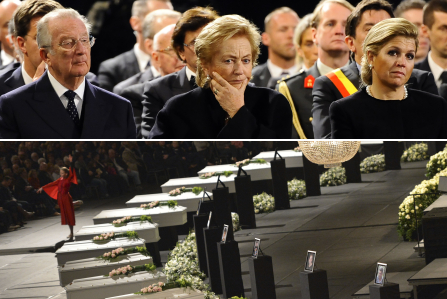 Prince Willem-Alexander and Princess Máxima, accompanied by Dutch Prime Minister Mark Rutte, attended the service to commemorate the six students involved in the crash that were of Dutch nationality.

Thousands also watched the service outside the arena, on big screens.

Belgian soldiers carried the fifteen coffins – one in brown, fourteen in white – into the arena, lead by a soldier bearing a photograph of each victim. As the official party entered the arena, they bowed before the line of coffins, before spending some time consoling the victims’ families.

During the three-hour service, euologies were given by dignitaries and family members. A representative of each victim’s family then pined a red rose into the centre of a giant cream heart, before the Scala choir sang U2’s With Or Without You as the coffins were carried from the arena and were taken to a local cemetary for private burial.

A second service will be held on Thursday in Heverlee, for the teachers and students from the second school.