A New Look at the Psychology of Henry VIII

According to Dr. David Starkey in the Sunday Times, Henry VIII was a real mama’s boy. Looking at handwriting comparisons (that of Henry, his mother, Elizabeth of York, and his younger sister Mary), Starkey draws the conclusion that he was emotionally dependent on women because of the close similarity of the samples. An exhibition opening in April at the British Museum will display the samples.

The Times quoted Starkey as saying “Henry was brought up very, very unusually, in a female household.” As we all know, Henry was merely the second son and during his formative years he was of little interest to the dynastically-minded father, Henry VII, who was consumed with establishing the questionable legitimacy of Tudor rule. Prince Arthur died at age 15, when Henry was only 11. Elizabeth died the following year, after attempting to give her husband another son.

During those early years Starkey says that Henry was tutored by his mother “both to read and, as we now see from the handwriting, to write, too”. The handwriting is described as bold, square and rather labored forms, unlike the writing of most men in the royal court. Starkey claims that his tutors and early role models, like Thomas More, have different handwriting styles. (Personally, I have to wonder if some unrecorded person, less prestigious than the tutors, taught both Elizabeth and her children. For example, my mother and I both had the same first grade teacher, thus accounting for some similarity in our handwriting.) Only a few exemplars of Elizabeth of York’s handwriting have been preserved.

It is known that Henry was very close to his sister Mary and they remained close, except for the brief times when she was Queen of France and then after she eloped with his best friend, Charles Brandon, later Duke of Suffolk (both in the portrait below). And he possibly named his first daughter after her, as well as naming his second daughter after his much-beloved mother. 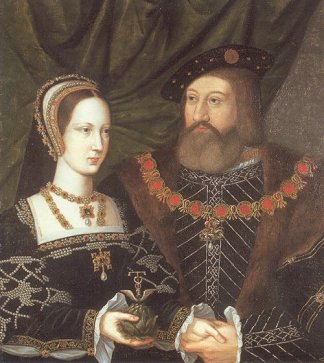 Starkey says that “He could never be without women in his life and was always falling in love. He also married, at least when it comes to most of his six wives, for love. It is just that he would also fall out of love.”
Was Henry in love with being in love? We do know that, aside from the periods between his mother’s death and his accession and the death of Jane Seymour until the arrival of the maligned Anne of Cleves, Henry was never without a love interest. And nothing could upset him more than perceived betrayal or abandonment by those he loved.
And was the premature death of Elizabeth of York the cause of Henry’s unruly behavior?
It’s interesting to draw a parallel between Henry Tudor and modern princes saddened by the early death of an adored mother. Perhaps it’s a good thing William and Harry Wales don’t have ready access to the scaffold!