The day is December 11th, 1936. Great Britain begins its day with an Edward VIII, and ends the day with a George VI.  His Majesty’s Declaration of Abdication Act 1936 had passed through parliament.

Sparking what was dubbed ‘The Abdication Crisis’, His Majesty King Edward VIII’s request to marry his lover, Mrs Wallis Simpson, was debated by parliamentarians, religious leaders, the press and the public during the month leading up to December 10 and 11. The Conservative government of the day, led by Prime Minister Stanley Baldwin, refused to grant permission for King Edward to marry. This refusal was also seconded by the Australian and Canadian governments.

The marriage between King Edward and Mrs Simpson was opposed for a number of reasons. One of the strongest was Mrs Simpson’s status as a divorced woman, with living ex-husbands. This posed an issue for the King as Supreme Governor of the Church of England, because the Church disallowed marriages of divorced persons whose former spouses were still alive. Divorce in England was also only considered valid at the time on the grounds of adultery, which was not the case for either of Mrs Simpson’s two divorces (firstly from Earl Winfield Spencer Jr., secondly from Ernest Simpson), so there was the possibility of a court challenge declaring the divorces void. There was also the rumour that Mrs Simpson was a Nazi agent/sympathiser. This did not sit well with the British Government, which was already concerned with the King’s interference in political matters. Opposition also came from the Royal Family and courtiers, who deemed Mrs Simpson ‘unfit’ to be Queen, based on her background and ‘activities’.

View the full image at RBA

Three options were surmised by the government as to what the outcome of the situation could be: marriage with full royal allowances (ie. Mrs Simpson becomes Queen), a morganatic marriage (ie. Mrs Simpson receives a secondary title, and does not become Queen), or abdication of the King and his future heirs. A meeting between the British government and representatives of the four British Dominions of Australia, Canada, New Zealand and the Union of South Africa (along with a representative of Ireland) found that only option three was acceptable. If the King truly wanted to marry Mrs Simpson, he had to give up the throne – which Edward VIII did shortly thereafter, decreeing in a speech following the official announcement that he could not perform his duties “without the help and support of the woman I love.” 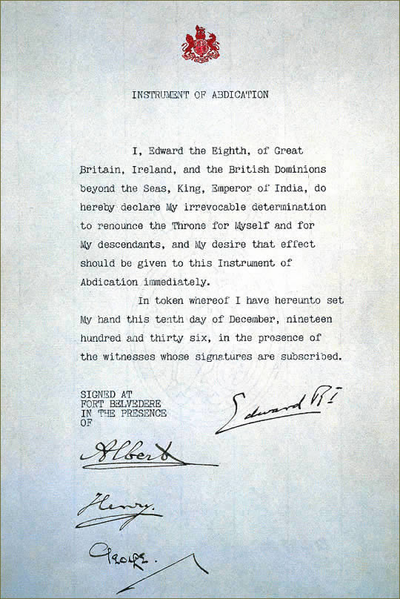 View the full-size image at the National Archives Flickr

The ‘Instrument of Abdication’ was signed by Edward VIII on December 10 at his Fort Belvedere residence, in the presence of Their Royal Highnesses The Duke of York, The Duke of Gloucester and The Duke of Kent, the King’s three younger brothers, who also signed the abdication document as witnesses. The document was then given to parliament, who gave their consent to the abdication, as did the Dominions (as was required at the time). King Edward VIII performed his final act as King of the United Kingdom of Great Britain, Ireland and the British Dominions, Emperor of India by giving his royal assent to the Act of Parliament which allowed him to abdicate. His brother, The Duke of York, was now King (he was officially proclaimed His Majesty King George VI the following day).

That same day, December 12, George VI gave his elder brother the title Duke of Windsor. When Edward married Mrs Simpson in June 1937, she became the Duchess of Windsor. Mrs Simpson for her part disagreed with the King’s abdication, trying to convince him several times to let her go and keep his crown.

Edward VIII has the distinction of being the only British monarch to abdicate the throne since prior to the twelfth century. He is also one of the shortest reigning monarchs, having reigned for only 327 days (discounting the disputed nine-day reign of Lady Jane Grey in July 1553 – King Edward V reigned in 1483 for only seventy-eight days).

Click here to read more about the Abdication Crisis in the British Forum.

7 Responses to The 1936 Abdication Crisis