The Danish Crown Prince Couple today welcomed the Duke and Duchess of Cambridge to Copenhagen, to increase awareness for the famine currently ongoing in North-East Africa (known as the Horn of Africa).

The Duke and Duchess, William and Catherine, arrived in Copenhagen around lunchtime and headed straight over to Amalienborg for a private lunch with Crown Prince Frederik and Crown Princess Mary at Frederik VIII’s Palace. Photographers and members of the public who gathered in the square were only given a fleeting glimpse of the visitors, before they entered the palace. 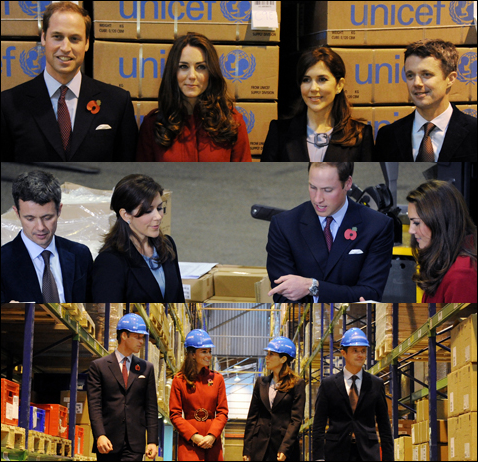 View the full gallery of images at UNICEF UK

The two couples later left Amalienborg, Frederik and William in one car and Mary and Catherine in another, and travelled across Copenhagen to the UNICEF emergency distribution centre. Once there, Mary and Catherine were presented with bouquets and the group posed for photographs outside the centre. Approximately 120 media outlets were covering the event.

Inside the distribution centre, the couples were given a presentation video detailing what the centre does, and were given a sample of high-energy peanut butter that is sent to famine-hit regions. Prince William didn’t hesitate before trying some of the food, but Catherine declined and passed it on to the Danes. It was then on to the distribution centre packing floor, where the royals were shown what goes in the relief boxes and assisted in packing some themselves. A tour of the centre was the final part of the visit, and Catherine got her first chance to don a hard hat – the group were all given blue UNICEF hard hats to wear as safety standards in the centre.

Following the tour, the couples gave quick interviews with the media (see video below). The Duchess said that the statistics of the famine were “shocking” and that, “A huge amount still has to happen. With hundreds of children still malnourished at the moment, hopefully we can do as much as we can.” Crown Princess Mary echoed the sentiment, “First they need boxes, the kits we were helping to pack today, because these medical kits, the nutritional kits, that’s what’s saving lives out there and it’s surprising to think that so little can save so many lives.” It was time for the two couples to bid farewell – Frederik and Mary headed home, while William and Catherine made their way to Kastrup Airport, where they were shown a British Airlines aircraft which has been packed by UNICEF and was ready to fly down to Kenya to deliver the supplies. After that, the Cambridges departed Copenhagen, on their way back to London.

UNICEF has already seen an increase in worldwide donations to the African famine cause, which they attribute to the Cambridges’ trip to Copenhagen. It was also believed that direcly after the visit, UNICEF UK’s Twitter page broke down, unable to cope with the increased traffic. All was well within a short time though, and a lovely gallery from UNICEF can be found here of the visit.

One Response to Frederik & Mary, William & Catherine Team Up for East Africa