The two women viewed the Duchess’ £250,000 Sarah Burton for Alexander McQueen wedding gown in one of the Palace ballrooms – and the Queen is reported to have said that the way the gown was displayed was “horrible” (or “creepy” depending on the news agency). The gown is on a headless mannequin, on a podium in the centre of the ballroom, which has only been dimly lit by the ceiling chandeliers and wall lights. It is accompanied by Catherine’s veil and the Cartier ‘Halo’ tiara, leant to the bride by Queen Elizabeth. 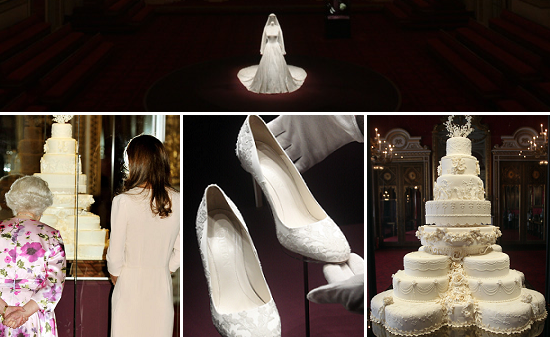 Also featuring in the exhibition are the hand-stitched Alexander McQueen bridal shoes – size 5 and a half, in case you were wondering – Catherine wore on the day,  her diamond earrings, a silk replica of her bridal bouquet, and the couple’s wedding cake. The curators of the exhibition revealed that the three top layers of the cake are not the originals, but were remade for the exhibition. The two top-most layers have reportedly been saved for the christening of William and Catherine’s first child (a tradition, according to the curator), while the third was served to guests at the wedding reception.

The exhibition, entitled The Royal Wedding Dress: A Story of Great British Design, runs from July 23rd to October 3rd. It is expected to smash previous records for the annual Palace summer exhibitions – the record currently sits at 420,000 back in 1994. The exhibition has already pre-sold 600,000 tickets for the session.