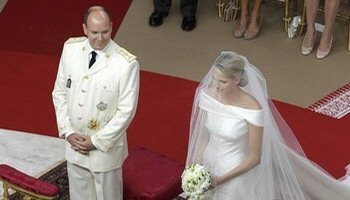 The religious wedding took place in the Main Courtyard of the Prince’s Palace. 2500 people were invited to watch the ceremony on larg creens at the Palace Square. After the ceremony, the Bridal couple left the Palace and went to the Sainte Dévote church in order for the Princess to leave her bouquet. Tonight, an official dinner will be held at the Opéra terraces, which will followed by fireworks and the opening of the Ball in the Opéra.

The weddingdress of the new Princess Charlene was created by Armani. The Princess wore a beautiful, yet simple figure hugging white dress, with a veil over her hair. Princess Charlene wore a gorgeos diamond hairpiece in her hair, which was in a really nice updo.

The mass
The wedding mass was presided by the Archbishop of Monaco, Bernard Barsi, and will be celebrated by André Dupuy, the Apostolic Nuncio to the Principality of Monaco, by Alberto Maria Careggio, Bishop of Ventimiglia-San Remo, by René Giuliano, Vicar General and by the whole clergy of Monaco.

The music
The Philharmonic Orchestra of Monaco and the Choir of the Opera of Monte-Carlo, prepared by Stefano Visconti, are placed under the direction of Lawrence Foster. Renée Fleming, soprano, Pumeza Matshikiza, soprano, Juan Diego Flórez, tenor and Andrea Bocelli, tenor, will also take part in the ceremony. The quartet of soloists for the elements of the mass composed by Mozart is made up of Lisa Larsson, soprano, Wiebke Lehmkuhl, alto, Kenneth Tarver, tenor and Alexander Vinogradov, basso. The Choir of the Cathedral of Monaco and the Little Singers of Monaco are under the direction of Pierre Debat, the Chapel Master of the Cathedral of Monaco and of the Prince’s Palace. The Grand Organ will be played by Olivier Vernet, lead organist at the Cathedral of Monaco.  The Choir Organ will be played by Jean-Cyrille Gandillet.

Father and mother of the bride
– Michael and Lynette Wittstock.

Sisters of the groom
– HRH the Princess of Hanover, Hereditary Princess Caroline of Monaco.
– HSH Princess Stéphanie of Monaco.

More information about the church wedding can be found in the thread:

Wedding of Albert and Charlene: Church wedding and celebrations, July 2 2011